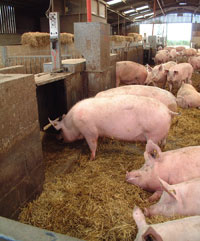 Nearly 60% of shoppers claim they will stop buying imported pork, according to a survey carried out on behalf of Waitrose.

YouGov surveyed 2200 UK adults on behalf of Waitrose in advance of the Jamie Oliver programme investigating pig welfare standards (you can read our preview of Jamies Saves Our Bacon here), which is due to air on Channel 4 tonight at 9pm (Thursday 29 January).

The results revealed a lack of awareness about EU pig intensive farming.

Of respondents, 70% were unaware that most imported pigs are reared in conditions that are illegal in the UK.

An overwhelming 85% of all consumers surveyed said they wanted clear labels on pork to provide information on the conditions the pig was reared in and identify the country of origin.

Waitrose managing director Mark Price said: “Waitrose has always led the way in high animal welfare standards. We were the first UK retailer to stop stocking imported bacon in November 2008 and now 100% of Waitrose fresh pork, bacon and sausages are British. We pride ourselves on knowing where every one of our pigs has come from, a claim few other retailers can make.

“UK pork may cost a little more, but you can enjoy your bacon roll with a clear conscience and rest assured that you are also supporting the British pig industry.”

Farmers Weekly will be gathering views about the Jamie Oliver programme. You can either post your verdict on the forums or join us for a live chat on FWi straight after the show and on Friday.