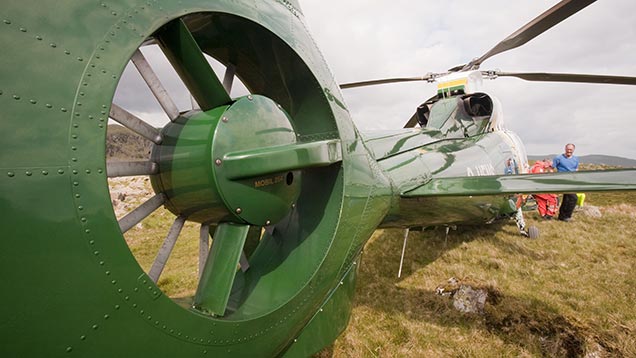 A Cumbrian farmer has thanked his local air ambulance after being rescued by the service for a second time.

Jonathan Thwaites, 37, of Eskewbeck Farm, Penrith, fell 6m when the barn roof he was fixing collapsed.

His father was on hand to raise the alarm and call the Great North Air Ambulance Service (GNAAS), which also saved him seven years ago.

This time around the farmer had suffered broken bones in his foot and wrist from the accident on 8 October and was flown by air ambulance to Royal Preston Hospital.

“I wasn’t sure how much damage I had done to start with – I’ve never felt pain like that,” said Mr Thwaites, who owns 600-700 Swaledale sheep and 110 suckler cows.

He praised the actions of the rescue team who arrived so quickly from their base at Langwathby.

“They are vital for people living in rural communities such as ours, where the nearest hospitals are some distance away.”

The father of three daughters was lucky to escape with just a few broken bones, according to GNAAS doctor Rachel Hawes.

“After falling from such a height, we would have expected the extent of his injuries to be worse, so Jonathan was very lucky,” she said.

The previous encounter with the air ambulance came after Mr Thwaites came off his motorbike while shepherding sheep at Bretherdale, Penrith, sustaining a fractured pelvis and a broken collarbone and wrist.

His wife Marie thanked the rescue team and highlighted their importance to farmers.

“They were here so quickly and are incredible, really – we can’t thank them enough.”

Mr Thwaites is now on the road to recovery and expects to be fully back at work in the next two weeks.