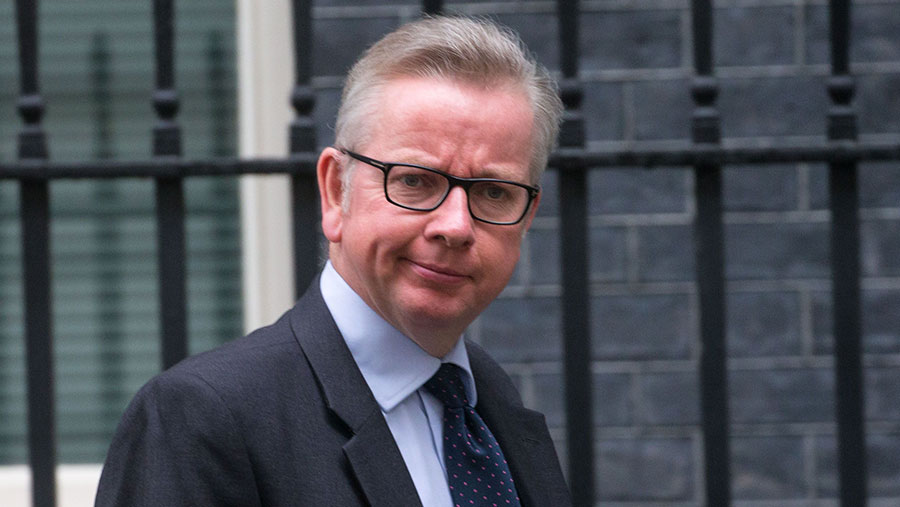 Defra secretary Michael Gove has been savaged on Twitter for comments promising farmers they will benefit from a free trade deal with the EU after Brexit.

Speaking at a press briefing at the Royal Welsh Show on Monday (24 July), Mr Gove said it was “a fact” the UK would agree a “comprehensive free-trade deal” with the EU after Brexit.

When a reporter challenged Mr Gove on how he could make such an assertion, he replied: “Because it’s in the interest of all parties.”

Many farmers and commentators have questioned how he can make such a bold statement before the UK has even started negotiating with the EU on a trade deal for agriculture after Brexit.

Has he written it in big letters on the side of a combine harvester?

There's no lim it to the man's talent. He knows the outcome of negotiations even before they've got going properly

I wouldn't even put this "promise" in my muck-spreader.

Here is a  transcript of Mr Gove’s interview.

We can offer them the fact there is going to be comprehensive free trade between Britain and Europe at the end of this process – because it’s in the interests of every party Michael Gove, Defra

Q During the EU referendum campaign, farm minister George Eustice said the Treasury would be able to fund UK agriculture to at least the same level outside the EU. Is that still the case post 2022?

A It is the case we were planning to ensure funding would be guaranteed until at least 2020. We are now making the promise it will be guaranteed until 2022, which no other government and no other party has pledged to do. I want to ensure we have the most generous possible support for agriculture in the future.

Q Farmers are very worried about the impact of Brexit to their incomes. In particular, sheep farmers are concerned about losing access to the single market. What assurances can you give that the interests of Welsh farmers will be placed very high in the Brexit negotiations?

A I said last week that in shaping any new system of agricultural support, we had to support upland farmers. Welsh hill farmers do an amazing job – not just in producing a high-quality product, but also in making sure that Wales stays beautiful and a magnet for tourism. And also, there are environmental benefits as well.

I will ensure that we have a system of agricultural support, but also access to markets, which ensures that Welsh hill farmers continue to be supported in the work that they do.

Q Wales’ first minister Carwyn Jones says farmers want certainty over Britain’s future trading relationship. But following the meeting Lesley Griffiths (Wales’ environment secretary) had with you today, he said the only certainty he has about the UK government’s position is it doesn’t know what it wants from the UK’s trading relationship? Is this right?

A I said to Lesley what I wanted to do was to make sure we had an approach going forward where Wales was happy through the Welsh government with what we wanted to do – and we are going to have meetings in September.

It would be perfectly possible for the UK government to say unilaterally, this is what we want and the Welsh, Scottish and Northern Irish governments are going to have to fall unilaterally behind. The reason why there is a question about exactly where powers would lie is because we want to hear from Wales.

I know some people like having their cake and eating it. The Welsh government either wants certainty now, or it wants dialogue.

Q What certainty can you offer farmers on trade now?

A We can offer them the fact there is going to be comprehensive free trade between Britain and Europe at the end of this process – because it’s in the interests of every party.

Q Will there now be monthly meetings between yourself and Lesley Griffiths?

A Well, regular [meetings]. It’s not just Lesley, but also the representatives of the other devolved nations. But from my point of view, whether it’s at a ministerial or an official level, the more chances I have to talk to farmers and land managers, as I have today, the easier it will be to get to an agreed position as soon as possible.