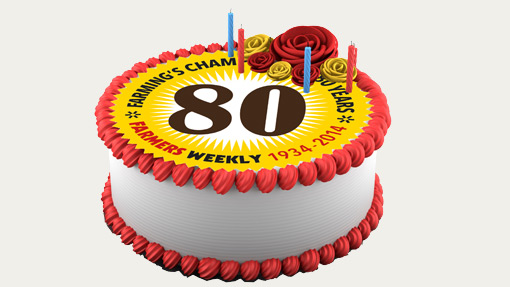 An 80th birthday may not qualify us for a telegram from the Queen, but we’re more than happy with these anniversary messages from some of the friends and foes made over the years.

I have to thank Farmers Weekly for giving me my first taste of speaking out for farming and farmers. The magazine asked me to write the Crops editorial columns back in the mid-1990s when I was the Pembrokeshire delegate on NFU council.

Writing this regular column for four years made me even more determined to represent farmers and make a difference; it encouraged me on a path which has resulted in me becoming president of the NFU. Throughout that time, Farmers Weekly was, and continues to be, a leading voice and a true friend of the farming industry. Here’s to the next 80 years.”

“Farmers Weekly is a staple read for farmers and agricultural workers right across Scotland and has been for generations. Eighty years is a fantastic milestone and I want to congratulate those involved with the continued success of the publication.”

“Over the years I have gone from an avid reader to an article writer for Farmers Weekly and was delighted to be awarded the 2010 Farming Champion of the Year, at the Farmers Weekly Awards. The magazine plays a very important role in communication both within the agricultural community and for those outside. It is amazing how farming has changed over the past 80 years and I am convinced there will be equally significant changes in the next 80 years. Wishing you a very happy 80th birthday!”

“Farmers Weekly was indispensable reading during my time at Defra. It was full of news and information, and was particularly useful for keeping up with the odd critic of some of my decisions! Best wishes for the next 80 years.”

“For me, Farmers Weekly has never been just a magazine, it’s a real advocate of a fair deal for farmers – we saw that in its support for SOS Dairy two years ago – and it champions the optimism within the agricultural industry. Farmers Weekly manages to report the facts but also speaks with a positive, forward-looking voice that takes pride in our industry. The Farmers Weekly Awards have become the Oscars of the farming world and the Farmers Apprentice initiative shows leadership in encouraging more young people to start a career in agriculture. Farmers Weekly is a true friend of farming.”

“Having featured as the winner of a Farmers Weekly farm safety competition in the early 1980s to becoming 2012 Farming Champion, Farmers Weekly has been part of my life for more than 40 years. It has served the industry well, and while I may not be here in another 80 years, our farming industry will be and I expect Farmers Weekly to still be the media backbone.”

“My favourite memories include drinking wine out of teacups in the student kitchens at Reaseheath while filming the first Farmers Apprentice and the stupendous success of the Farmers Weekly Awards, which have grown in popularity and stature. They are a true celebration of the talent in agriculture but with risky entertainment acts, some of which probably made their names there and others never to be seen again!”

“Congratulations! When there is so much debate about whether any written media will survive, Farmers Weekly is demonstrating strong roots in the community it serves.”

“The worthy winners of the Farmers Weekly Awards set a fine example and challenge to the next generation of young farmers and managers. I feel proud to have been involved over many years and encourage Farmers Weekly to continue to lobby for growth and food security.”