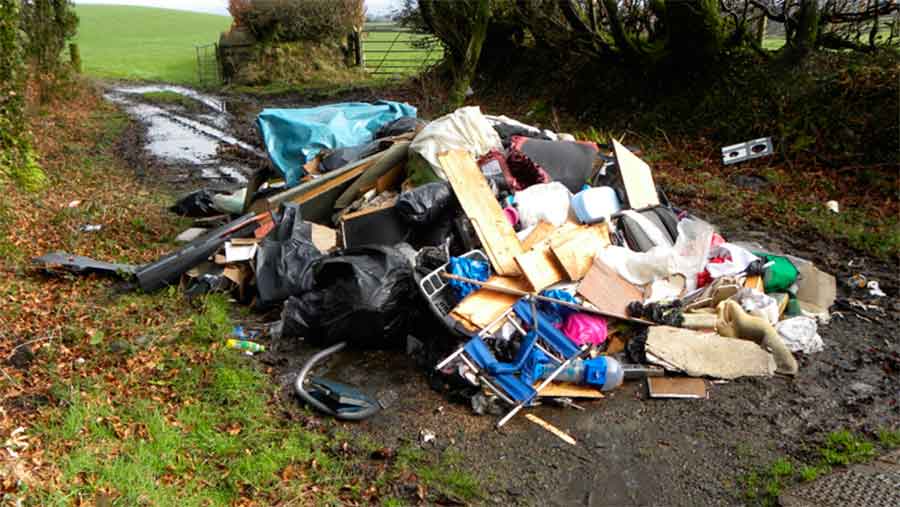 A skip operator who dumped waste on the edge of Dartmoor has been ordered to pay more than £4,000 in fines and costs after he was tracked down by a farmer.

Connor Calam took skip loads of waste from Plymouth to the outskirts of Okehampton where he emptied them in the gateway of a farm, blocking the entrances to three fields.

Farmer Courtney Heard was so upset by not being able to get onto his land at Pudson Farm, off Hatherleigh Road, Okehampton, that he rifled through the rubbish and traced where it had come from.

See also: Read the results of our fly-tipping survey

He found receipts made out to a building firm named Zenith from merchants in Newton Abbot and South Molton buried among old bits of timber and plasterboard.

He alerted the Environment Agency, which discovered that Zenith had paid Mr Calam’s Plymouth Skip Hire £245 to take it to an authorised site.

Zenith then had to fork out a further £500 after agreeing to pay to have the rubbish removed, even though the fly-tipping was not its fault.

But he was found guilty of one charge, which related to rubbish picked up from building sites in Plymouth by his firm, Plymouth Skip Hire.

He was fined £2,000 with £2,000 costs and £260 compensation, and ordered to attend a thinking skills course by Judge Peter Ralls, QC, at Exeter Crown Court.

The judge decided not to activate a previous one-year suspended sentence from Plymouth Crown Court for unrelated cases of dangerous driving, driving while disqualified and without licence or insurance.

Judge Ralls told him: “The farmer was prevented from having proper access to his fields and this waste was no doubt an eyesore to the public in a sensitive area.

“You took the opportunity to make more money for your business by not disposing of waste legally.”

Katie Churcher, defending, said Mr Calam had stayed out of trouble since committing these offences in February last year and has started a new vehicle recovery business from which he earns £1,000 to £1,500 a month.

She said he has no paperwork to confirm his income because it was all inside a truck which was burned out three weeks ago.