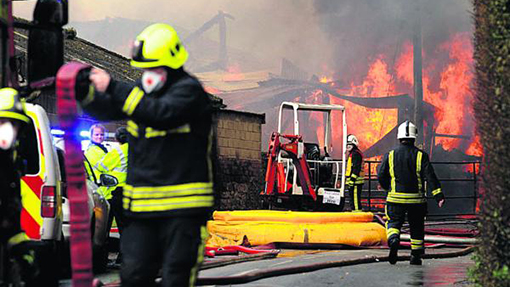 Forty firefighters battled a major barn blaze which tore through tonnes of hay and straw.

The fire at West End Farm, Rowde, Wiltshire, broke out just after 11am on Monday, closing the main road between Chippenham and Devizes in Wiltshire.

The flames quickly spread to other barns and outbuildings, but according to Wiltshire Fire and Rescue Service, was never in danger of reaching the farm house.

Command support manager Ade Hurren said: “The first crews did a tremendous job containing the fire when they arrived. They were met with a wall of flames and had to deal with a difficult water supply.”

Low water pressure from the village hydrants meant specialist water carriers had to be called in to help, he added.

No one was injured in the fire and the farm’s livestock was unaffected in nearby fields.

The A342 reopened at 7am on Tuesday (21 October), but firefighters were still on the scene to dampen the smouldering remains.