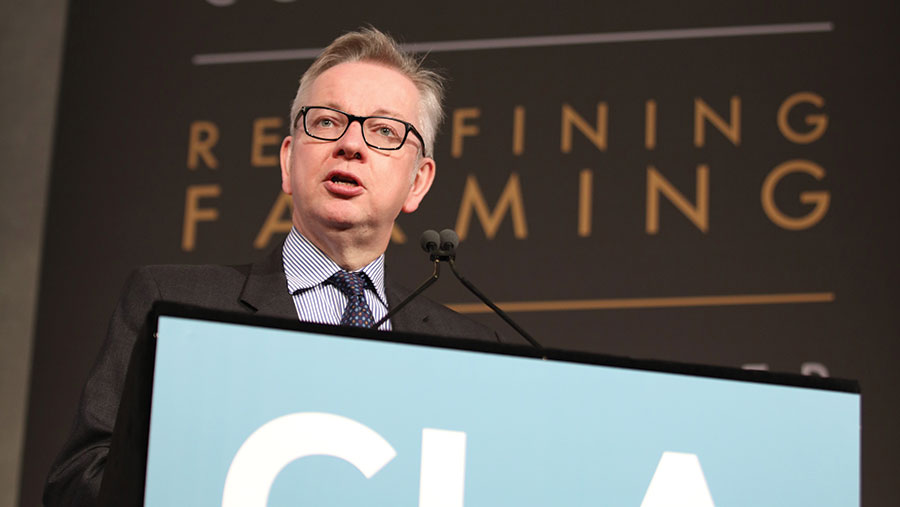 Farmers and landowners are still searching for answers about how agriculture and food production fit in to the government’s environmental strategy.

In a speech at a Country Land and Business Association (CLA) conference in London on Tuesday (29 November), Defra secretary, Michael Gove, repeated much of his Sunday Telegraph column from last week, saying the CAP had been bad for the environment.

He again set out his vision of farmers being paid for environmental goods and also the benefits of using high welfare and environmental standards to sell exports.

Mr Gove encouraged people to enjoy the UK’s “beautiful countryside” – including by “glamping near a gastropub” – explaining it could bring economic benefits, he said.

But audience members questioned how the government was going to ensure a strategy that ensured the profitable production of food as well.

One CLA member asked him: “In a non-EU or non-deal world, how are you going to support not just the environment but also the profitability of food and agriculture for the future?”

Mr Gove appeared a bit lost for words and replied that consumers wanted to know more about where their food comes and that this gave opportunities for high-quality British food exports.

Christopher Price, director of policy and advice at the CLA, said in reaction: “The secretary of state is quite right to recognise that farmers and landowners need to be rewarded for the public and environmental benefits they could and should be providing.

“But it would be useful if he were to give a clearer indication of his views on agricultural policy going forward.

“We’ve been informed of what he thinks on the environment on a number of occasions and that’s all for the good, but I think farmers are going to be concerned if they don’t get an indication of what he’s going to do in that area.”

The government’s industrial strategy, published on Monday (27 November), announced a new Food and Drink Sector Council to promote “the UK’s position as a global leader in sustainable, affordable, safe and high-quality food and drink”.

But Tim Smit, founder of the Eden Project and the speaker to follow Gove at the CLA’s rural business conference, said: “The minister and his super speech cannot disguise the fact that agriculture and health and society and education are part of a collectivised notion of society.”

How can we have a strategy for these if they are treated in silos, he asked.

“We all hope for moments when people actually deliver a strategy – not a series of initiatives which are about a bunch of pretty incompetent people having meetings to decide how they’re going to distribute money in a non-impactful way.”

“Honestly, the wastage through not understanding strategy is enormous,” he added.