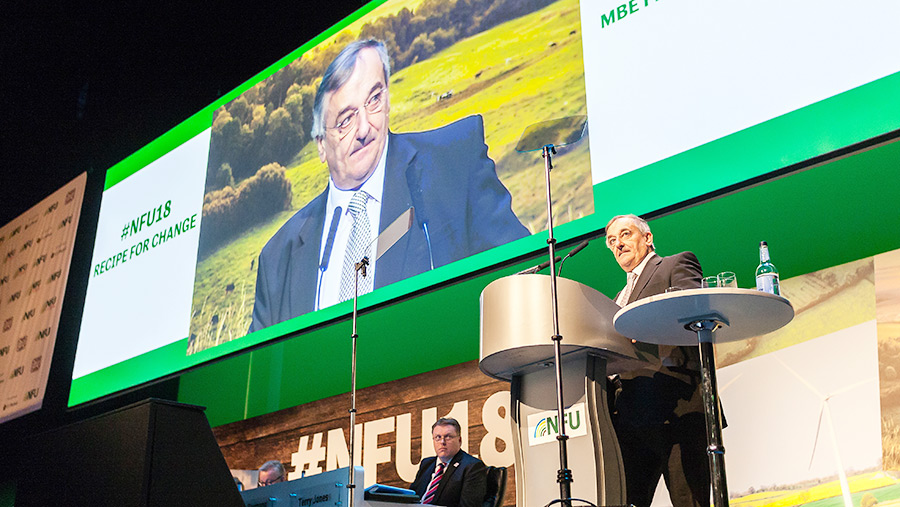 Outgoing NFU president Meurig Raymond has urged farmers to ensure that the government delivers on pledges made by Defra secretary Michael Gove.

Mr Raymond issued the plea as he delivered his final speech as NFU president to the union’s annual conference in Birmingham on Wednesday (21 February).

It came at the end of the two-day event – which included a keynote address by Mr Gove, setting out a number of promises but little detail on how they might be realised.

Mr Gove said he was pleased to announce that the government would conduct a thorough and comprehensive review with the aim of simplifying the farm inspection regime.

“We want to see how inspections can be simplified, in some cases removed, reduced, or improved, in order to reduce the burden on farmers,” he said.

On future support for farmers, Mr Gove said animal welfare was among the “public goods” that could be funded under a post-Brexit agricultural policy.

“We could also support industry-led initiatives to improve these standards, especially in cases where animal welfare remains at the legislative minimum,” he said.

“When we leave the EU we can put that money towards domestic priorities, like making our digital infrastructure work by improving rural broadband and connectivity overall,” he said.

On the need for a seasonal agricultural workers scheme so farmers had access to temporary labour from overseas, Mr Gove said the NFU had put forward “compelling arguments”.

He added: “I understand the impatience of people in this room for an announcement. I fully acknowledge your concerns and we will be saying more shortly.”

Mr Gove said the NFU had also campaigned hard for investment in a multi-species Livestock Information Programme, which could improve food traceability.

Speaking in response to Mr Gove’s announcements, Mr Raymond said it was vital that the union and the wider farming industry held the government to account.

“Most importantly, he was emphatic that any new trade deals must not threaten our high standards,” he added. “Now we must make certain that these pledges are delivered.”

The government is expected to outline further details of its post-Brexit policies for agriculture in a public consultation document later this spring.

It will then publish formal proposals in an Agriculture Bill later this year.

The UK is scheduled to leave the EU in March 2019.