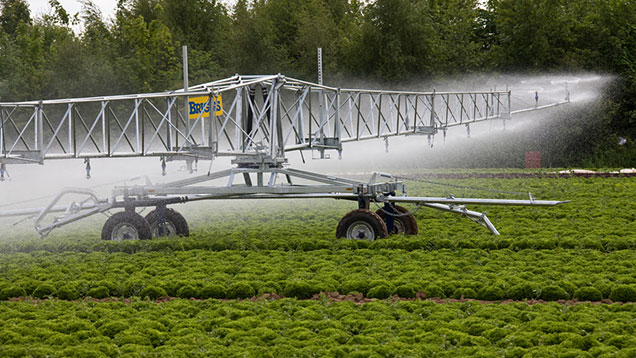 Eastern region growers fear water shortages will leave them unable to grow crops – despite taking steps to protect their businesses from drought.

Irrigated crops account for more than half the farmed area along the Lark catchment in Suffolk and the Wissey in Norfolk.

Farmers who irrigate crops in the sub-catchments use two-thirds of the water allocated to them by their abstraction licences during an average or normal year, according to an NFU survey.

There was no dominant source of water used by farmers, with surface water and/or groundwater used relatively equally. Farmers did not use mains water for irrigating crops.

Three-quarters of farmers in the Wissey had built a reservoir but less than a half of Lark abstractors had invested in storage.

Some farmers had two, three or even four reservoirs.

Even so, farmers said they still lacked long-term confidence about gaining secure access to water for food production in the future.

Three-quarters of farmers in both the Lark and Wissey sub-catchments said they were very or quite confident about water availability for the 2015 irrigation season.

But only one-third of farmers said they felt similarly confident for the outlook in five years’ time and only one quarter of farmers were confident over a 10-year period.

A combination of greater drought risk and government proposals for water abstraction licensing reform is believed to be the major contributor to declining confidence.

Most farmers in the Lark (84%) believed there was sufficient water for existing users during “average years”, while half thought there was enough water during “dry years”.

By comparison, however, only one-third of Wissey farmers believed there was enough water in their system during “dry years”.

Perhaps surprisingly, four-fifths of all reservoirs are more than 10 years old, indicating that taking action to increase resilience to water shortage is not a new issue for farmers.

For farmers with one or more reservoirs, the total capacity available to each respondent in the Lark ranged from 4.5m to 165m gallons, with an average of just under 58m gallons.

The range for Wissey abstractors stretched from one million to 410m gallons, with an average of just under 68m gallons.

Farmers’ reasons for building reservoirs varied, but the main drivers for investing in storage focused on ensuring access to water during periods of shortage.