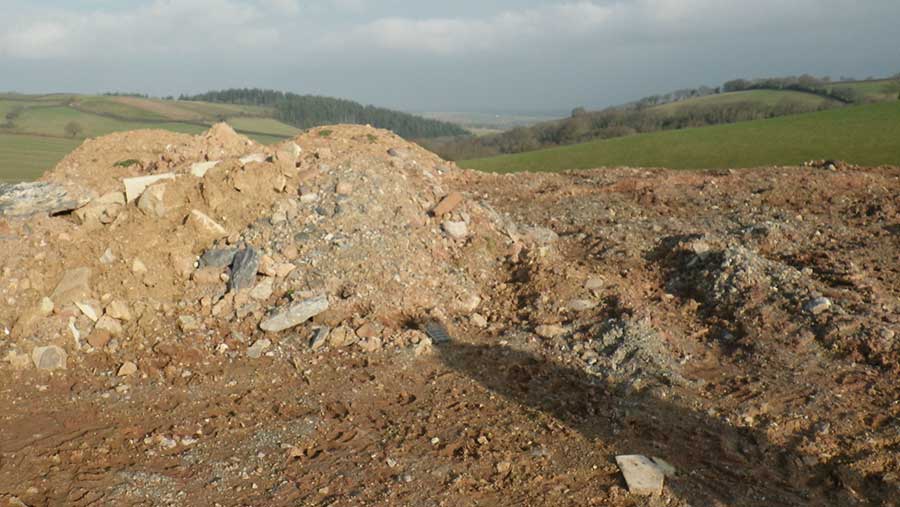 A Devon haulage company has been ordered to pay £109,000 for dumping thousands of tonnes of soil and stone on farms.

CC Haulage & Sons, a haulage and site clearance company, admitted it should have checked farmers had necessary permits to accept the waste from building and construction sites.

The family owned and run company is based at Manor Farm, Colebrooke, Crediton. The two directors are Colin and Deborah Clarke.

Farmers are allowed to accept up to 1,000 tonnes of non-hazardous waste, including soil and stone, under a permission known as an “exemption”, which is commonly used on farms to construct hard-standings, bases for buildings and tracks, and doesn’t need an environmental permit.

In November 2016, the Environment Agency visited Beech Down Farm in Tedburn St Mary, where waste was being tipped in a valley. Inquiries revealed that CC Haulage had deposited 7,820 tonnes of waste at the farm.

Excessive quantities of waste, much of it from building and construction sites, had also been tipped at three other Devon farms, in Exeter, Yeoford and Crediton.

CC Haulage benefited financially by paying the farmers less to accept the waste than it was charging its clients to take the material away.

The case was heard at Exeter Crown Court on 15 January.

Richard Cloke of the Environment Agency said: “Haulage businesses must ensure they comply with the limits and conditions of environmental permits and exemptions.

“These are in place to stop the illegal deposit of waste, protect the environment and create a level playing field for the waste industry.”

The firm’s defence said CC Haulage believed the farmers had the necessary permits to accept the waste, but admitted the company should have checked.

The company was fined £14,000 and ordered to pay £5,000 costs. Judge Geoffrey Mercer also imposed a £90,000 Proceeds of Crime confiscation order. The company must pay back this figure from the profits it made from its criminal activities.

Judge Mercer said: “It is not entirely clear to me how the company were unclear about the limits.”