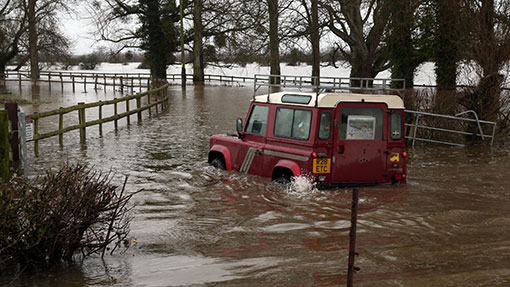 The plight of farmers battling to save their livelihoods from high water on the Somerset Levels had touched hearts across the country, said Mr Ward.

The Lincolnshire grower was named Farmers Weekly Farm Champion of the Year after organising a forage aid scheme to transport fodder to snow-hit farmers in 2013.

Now he is helping to get animal feed to livestock producers who have been forced to evacuate livestock as flood water has engulfed farms.

Mr Ward said: “I am getting enquiries from all over the UK because of the Forage Aid scheme I started and ran last year.”

Other people are also helping out. So too are agricultural suppliers, feed companies, other rural businesses and the NFU.

Sedgemoor livestock market at Bridgwater has been acting as a drop-off and collection point for animal feed, forage and straw bedding.

It comes as Environment Agency chairman Lord Smith hit back at criticism over his organisation’s response to the floods.

One load of straw sent to Somerset was transported by Premier Foods from James Howe Farming, near Alford, Lincolnshire.

Gary Sharkey, head of wheat procurement at Premier Foods, said: “We felt we had a moral obligation to help – it’s about doing the right thing for farmers and their livestock.”