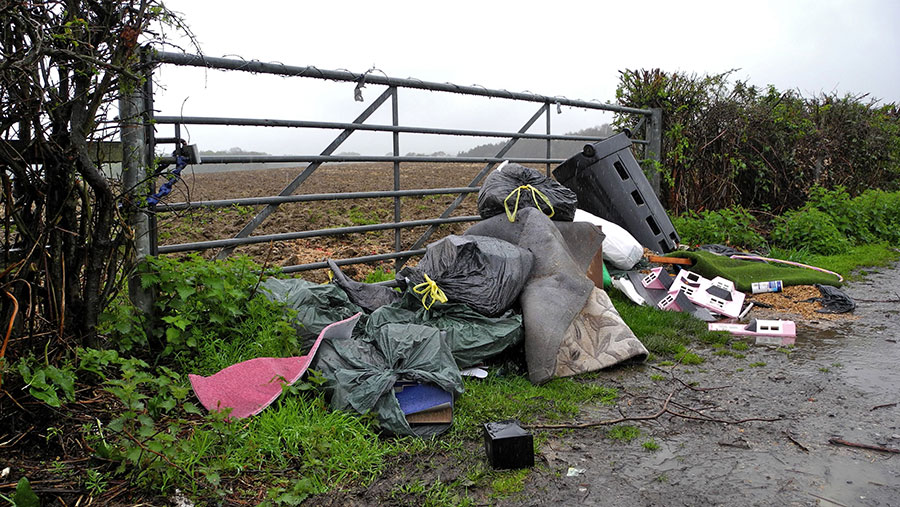 Householders whose rubbish ends up on farms or in the countryside could be handed big fines, under government plans to tackle fly-tipping.

Councils could be handed new powers to fine households who use unlicensed waste carriers to dispose of their rubbish up to £400, Defra said.

The option of fining those whose waste ends up fly-tipped or illegally dumped would save councils the need to spend millions of pounds in taxpayer money pursuing people through the courts.

Householders are being warned not to be tempted by “cash in hand” deals to remove rubbish from their homes as this could end up costing them more if their waste is found dumped in the countryside.

Criminals often take the cash and decide to dump the waste in the countryside to avoid paying councils fees to dispose of it correctly.

The measures are included in a consultation launched on Monday (15 January), which aims to crack down on fly-tippers and illegal waste sites. They could be introduced as early as this spring if a vote in parliament is passed.

Other proposals include new powers for the Environment Agency (EA) to lock the gates or block access to problem waste sites to prevent thousands of tonnes of waste illegally building up.

The powers will also enable the agency to force operators to clear all the waste at a problem waste site, not just the illegal waste.

Environment minister Therese Coffey said: “Waste crime and fly-tipping blight our communities and spoil our countryside, and we need determined action to tackle it.

“These new powers for the EA will curb the rise of waste sites that continue to operate outside the law.

“But we must all take responsibility for our waste to make sure it does not end up in the hands of criminals who will wilfully dump it.”

While an average of two illegal waste sites are shut down every day, they continue to create severe problems for local communities and business as well as posing a risk to key national infrastructure.

Household waste is also a problem and makes up nearly two-thirds of fly-tipped waste. Much of this waste ends up being dumped in the countryside or on farms, leaving the private landowner with the responsibility to clear the mess.

Latest statistics show some of the worst hit areas include London, which saw more than 360,000 fly-tipping incidents last year, and the North West of England, which saw 128,000 incidents in 2016-17.

Last April, Farmers Weekly in association with CLA Insurance launched Stop the Blot, a campaign which aims to highlight fly-tipping in the countryside and urges the government to do more to prevent this waste epidemic.