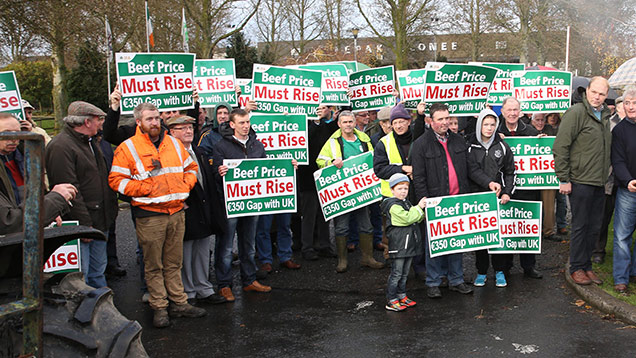 More than 4,000 cattle farmers have threatened to boycott Ireland’s quality assurance scheme as protests against low beef prices spread across the country.

The latest action, a 48-hour protest targeting 14 meat processing plants, began on Sunday 9 November. It is the second round of protests within two weeks organised by the Irish Farmers Association (IFA).

IFA president Eddie Downey claimed UK farmers were receiving €1/kg (£0.79/kg) or €350 (£275) a head more for cattle than their Irish counterparts and anger with meat factories had “boiled over”.

Mr Downey said the resolve to continue protesting was very strong among farmers as incomes for beef units had dropped by 22% in the past 12 months.

“Beef processors have to take responsibility for the massive €350 gap between the UK beef prices and ourselves,” Mr Downey said.

“Even with incontrovertible market evidence that shows how the UK price has moved on in recent months, [processors] have continued to deny farmers a return that reflects improved market conditions,” he added.

Meanwhile, the Irish Cattle and Sheep Farmers Association (ICSA) revealed that 4,000 farmers had signed a pledge to withdraw co-operation from Ireland’s Farm Quality Assurance scheme unless its demands were met.

Patrick Kent, ICSA president, said that while price was obviously “a source of huge anger” for his members, they believed it was the underlying specifications governing age and weight limits for cattle that had facilitated price cuts over the past year. Mr Kent reckoned the moves had cost at least €170m (£133m).