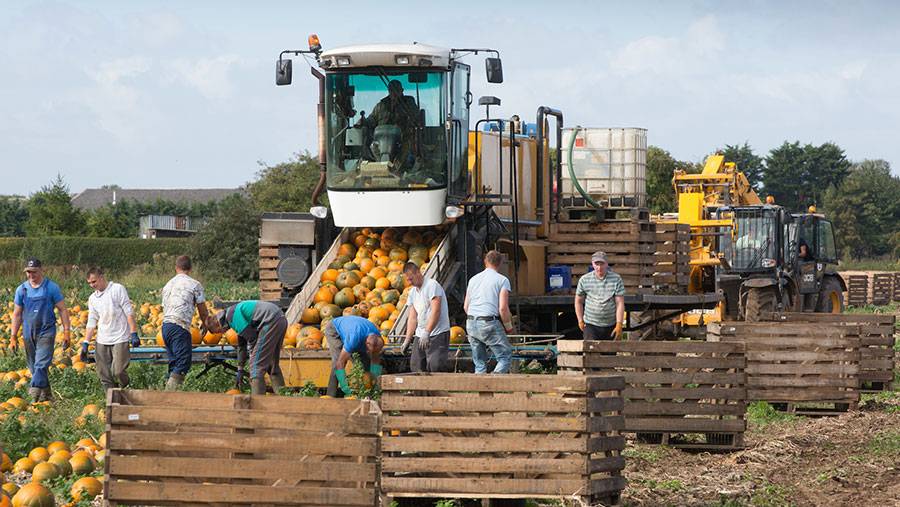 Farm leaders have warned of a serious threat to the entire food chain, if leaked government plans result in restrictions on the availability of unskilled migrant labour from the day the UK leaves the EU.

The plans are contained in a Home Office document leaked to the Guardian newspaper.

“Wherever possible, UK employers should look to meet their labour needs from resident labour,” it said.

The plans – yet to be endorsed by ministers – also seek to clamp down on “unskilled” workers, who would only be allowed to stay for a maximum of two years.

Longer-term permits, of three-to-five years, would be limited to “high-skilled occupations”.

While the government has refused to comment on the leaked document, saying it will be issuing formal proposals in the autumn, it is likely to please hard-line Brexiters within parliament.

But NFU deputy president Minette Batters has stressed the need for a competent and reliable workforce.

“Across all sectors, particularly in horticulture, poultry, pig and dairy, access to both seasonal and permanent workers is absolutely critical for the nation to continue producing food to feed the British public.

“An abrupt reduction in the number of EU workers able to work in the UK after we leave the EU would cause massive disruption to the entire food supply chain.”

She reiterated the NFU’s call for an “urgent and clear commitment” from government to ensure the availability of workers post Brexit, especially at a time of record low levels of unemployment.

“And we need clarity on the new rules for EU nationals living and working in the UK well before free movement ends in March 2019.”

The Food and Drink Federation also expressed alarm at the draft proposals.

“If this does represent the government’s thinking, it shows a deep lack of understanding of the vital contribution that EU migrant workers make – at all skill levels – across the food chain,” said director general Ian Wright.

Pressure group Migration Watch has described the proposals as “excellent”.