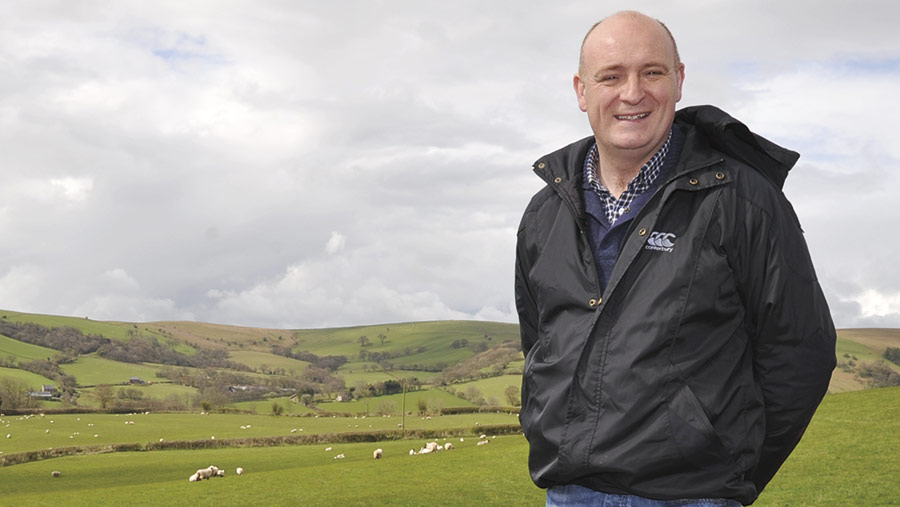 Beef and sheep farmer John Davies has stepped up from deputy to president at NFU Cymru. Debbie James talks to him about his vision for Welsh farming.

NFU Cymru’s new leader didn’t vote for Brexit but is cautiously optimistic that the country’s departure from the European Union presents an opportunity to shape an ambitious future for Welsh agriculture.

John Davies is just days into his new job and is fired up with energy and enthusiasm, but also a good dose of realism as he contemplates the challenges that lie with influencing the policies that will shape farming for his generation and the next.

An immediate priority is to secure the best possible deal for Welsh farmers from the Brexit negotiations, he says.

“We need to make sure the deal delivers a level playing field for Welsh farmers; how can we be expected to compete on price with countries that authorise the use of growth hormones in livestock production or finish beef in vast feedlots?”

This prompts discussion on another subject he sees as fundamentally unfair – ambiguous food labelling.

The new president says price will always be the main driver of food choices for some consumers, but not for others.

“We might need to form alliances with organisations that are outside our normal comfort zone,” he suggests.

“Wouldn’t it be great to see the RSPB logo on Welsh lamb and beef? And look at the credibility that the World Wildlife Fund has – are there opportunities for working together?”

He says retailers must support Welsh farming if they want the products to still be there after Brexit.

“It is every farmer’s aspiration to farm without support but we can’t do that if we don’t get a fair price for what we produce.”

Mr Davies is an upland farmer but recognises that, in a period of unprecedented change, the utopian vision of uplands where livestock production continues in much the same vein as now is not realistic.

“Livestock farming is in my blood but that is not to say that I, or any other upland farmer, should ignore additional opportunities that come from energy production and flood protection, we must look at each and every opportunity.

“I have yet to meet a farmer who, when an opportunity is presented to them, shows no interest.

“Productivity, community and the environment are inseparable and part of my DNA as a Welsh farmer.”

And so too are succession and the next generation – he has two children who are following in his footsteps.

“It is important that young people feel there is a future for them in farming, one way we can do that is by delivering a strong brand for everything that Wales produces in terms of agriculture and rural tourism.”

After Brexit, one of Mr Davies’s biggest worries is bovine TB.

“I want to see a significant reduction in TB at the end of my term and to do that we need to move forward in tandem with government and learn lessons from other areas,” he says.

So, is Lesley Griffiths, the cabinet secretary for energy, planning and rural affairs, someone he feels he can do business with?

“I think the recent decision on nitrate vulnerable zones (NVZs) is a good example of that,” he says, referring to the combination of voluntary and regulatory measures being considered to end water pollution from agriculture in Wales.

“It is now up to farmers to deliver on that.”