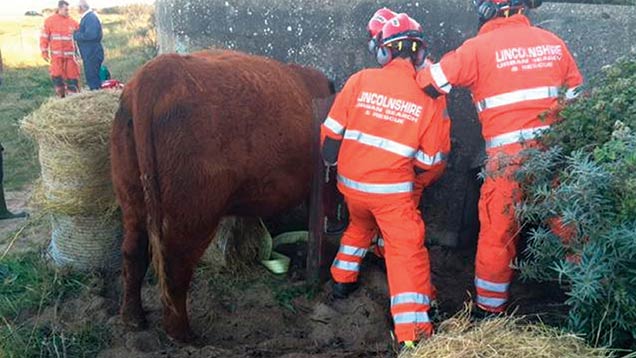 Four of the lighter stories featured in Farmers Weekly in 2014.

Firefighters and a vet were called to rescue a cow that got its head stuck in the window of a concrete military pillbox (pictured).

The curious cow was so tightly jammed at the farm near Skegness in Lincolnshire, that she had to be sedated while rescuers carefully chipped away at the concrete. She eventually walked away unscathed.

Police seized a tractor as it drove down the M6 in rush-hour traffic.

The police said the tractor was being driven through the infamous “spaghetti junction” in Birmingham at 5:30pm when they were called by worried motorists. Officers carried out checks and found the driver was uninsured so the Case tractor was impounded. The driver was unaware that it is against the law to drive tractors on motorways.

Triplet calves are not that uncommon for Holstein Friesians, but when one gave birth to three separate breeds at the same time it caused a stir.

Farmer Peter Combridge, of Brownlow Farm, near Grantham, Lincolnshire, was shocked to see the Limousin, Simmental and Charolais calves.

The fourth-lactation cow was AI’d with mixed-breed semen, which contains the three different breeds to extend the period over which an insemination remains viable.

A farmer resisted wildlife campaigners and built a 300ft long “prison-style” fence in a countryside field to protect his livestock.

Haulage boss Alan Brunt built the fence at Rodden Lake Stream Meadow in Frome, Somerset, to protect his cattle from dog attacks and from risk of disease posed by dog mess.

He said: “The dog mess creates germs which get into cattle and abort the calves. I don’t want that happening.”