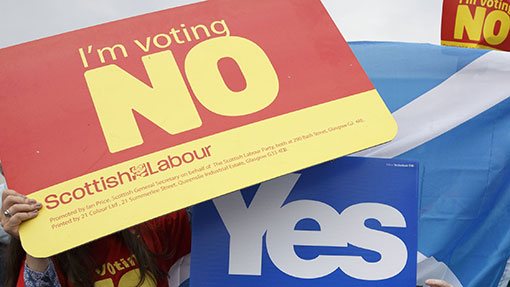 It’s been another tumultuous 12 months in farming. But some of the events that Farmers Weekly has covered have reached a more solid or united conclusion than was expected when the stories first broke.

Fears of a disunited rural Scotland in the wake of the referendum on independence proved unfounded.

In the run up to polling day on 18 September, the pro-independence lobby had gained momentum. One poll put the “Yes” camp slightly ahead.

Tensions rose and spilled over from the political jostling on CAP support, exports and currency issues, to acts of vandalism at farm level.

Field-based campaign boards were defaced or destroyed, reconstructed and smashed down again and again.

Farming families began to fear that rifts and feuds in rural communities would never heal regardless of which way the vote went.

But as the votes were counted and it became clear that Yes voters had seen their independence dream collapse, they quickly translated their deep disappointment into a determination to hold politicians to promises of greater powers for Scotland.

That grassroots resolve and positivity, which spread quickly across political divisions, went a long way towards healing the differences on either side of farm fences.

It has meant that in the aftermath of the hard-fought constitutional vote there is surprisingly little animosity among farmers. On the contrary, there’s a growing belief in farming circles that there is now everything to play for.

The Wellcome Trust has pledged to continue investing in agriculture after buying the Co-operative Group’s farms business for £249m – a deal said to be the biggest of its kind.

With a turnover of £59.1m and an operating profit of about £7m in 2013, the Farmcare business was put up for sale in February. It covers 15,997ha – included substantial holdings at Hinxton in Cambridgeshire and Kings Langley, Hertfordshire.

Losses in the Co-operative Group’s banking business were one of the main driver’s behind the surprise sell-off. Sale proceeds would be used to repay debt and invest in the core business, said the group, which started farming in 1896.

Bidwells, who advised the trust, said the deal underpinned an ongoing trend from investors to acquire agricultural land. UK agricultural property continues to outperform all other mainstream investment asset classes.

A £3m anaerobic digestion plant at Harper Adams University collapsed for the second time in 18 months in May.

Emergency crews worked around the clock to contain the slurry leak on the estate near Newport, Shropshire. The valiant efforts and the safety measures which had been put in place by the college successfully prevented a serious pollution incident.