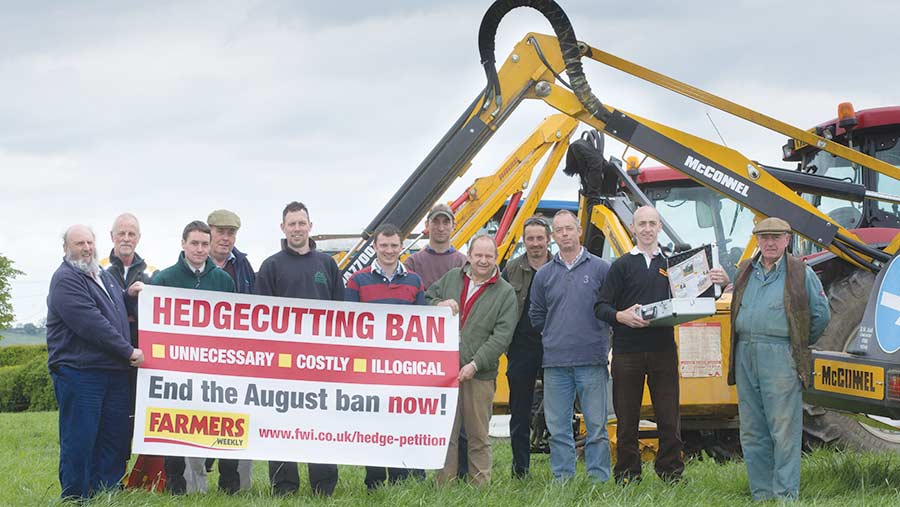 Farmers Weekly looks back at the biggest stories to hit the headlines from January to March, including the hedgecutting row and delayed BPS payments.

The petition was launched in mid-February in response to Defra’s 2015 decision to extend the hedgecutting ban to cover the month of August.

The NFU, the Country, Land & Business Association (CLA) and the National Association of Agricultural Contractors (NAAC) questioned the justification for extending the ban.

It is deeply unpopular with agricultural hedgecutting contractors, who are forced to sit out one of their busiest times of year, when they would normally follow the combines around. Many are losing thousands of pounds in income.

But conservationists argue trimming hedges in August harms nesting birds, such as yellowhammers and linnets.

In May, farmers and contractors broke off from busy spraying and grass mowing schedules to attend a petition rally organised by Northamptonshire hedgecutting contractor Bob Rutt.

Some came from as far as Essex and Warwick to attend the event, held at Mr Rutt’s farm in Corby.

He said: “The specialist contractor such as myself is up against the weather, time and the prospect of not getting your money when you need it.

“We are forking out thousands of pounds on specialist equipment which is sat in the shed in August at historically one of our busiest times. We are 100% reliant on our customers [farmers] to give us work.

“From September onwards, landowners are reluctant to let you on the ground, especially if it’s wet.

“Again, the powers that be [Defra] have jumped in favour of hitting the defenceless [contractors] where it hurts by making it impossible to do a fair day’s work, without being penalised.”

Mr Rutt said Defra had taken the decision to extend the ban without due consultation and had accepted the advice of the RSPB, who “had taken the easy option to blame the farmer for any downturn in the small bird population”.

He added: “The truth is they should be looking at predation of the nests and fledged young by corvids [jays, magpies and carrion crows] and raptors [sparrowhawks, kites and buzzards] and also the domestic and feral cat population.”

But a Defra spokesman said: “We have concluded our existing approach offers the best protection to our wildlife.”

Delays in CAP payments left thousands of farmers across the UK struggling to cope financially this year.

In England, the Rural Payments Agency (RPA) announced 90% of eligible claimants had received their Basic Payment by the end of December 2016 – and then 95% by the end of January.

But by February, the pace of payments decelerated to a few hundred, leaving some 4,000 farmers still unpaid and many in financial turmoil.

The NFU said most of those unpaid suffered inspections and had their claims put in the “pending pile” as the RPA concentrated on paying the non-inspected 95%.

The couple, who farm an 80ha beef enterprise near Cannock in Staffordshire, were among the 5% of farmers who were not paid their 2016 BPS payment by February after their farm was subject to a greening inspection.

The NFU and the Tenant Farmers Association refused to blame him for delayed payments.

Instead, he blamed the government’s decision to adopt an “IT by default” approach.

The payment delays prompted the then Defra secretary, Andrea Leadsom, to announce that eligible farmers who had not received their full payment by the end of March would be offered a bridging payment for 75% of their estimated value.

In Scotland, the Scottish Conservatives accused the SNP-ruled Scottish government of “badly letting down” farmers over delayed payments.

Dogged by ongoing problems with its misfiring £178m IT system responsible for delivering payments, the Scottish government applied for a four-month extension to the payment deadline to 15 October.

Audit Scotland warned the Scottish government it could be fined up to £60m by the European Commission for its late payments fiasco.

In Wales, more than 90% of BPS payments were made in the first week of December 2016. And in Northern Ireland, advance payments worth up to 70% of claims were issued from 16 October 2016.

A round-up of other news from January to March