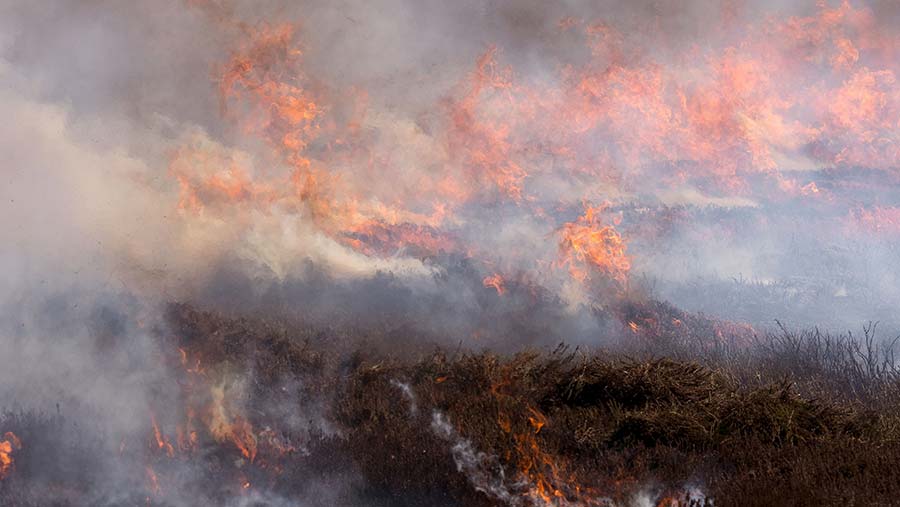 As I write, the Otterburn ranges, where we live, are still smouldering. Fire broke out several weeks ago, caused by the army live firing onto bone-dry moorland.

I’ve been told the huge smoke plumes were visible from the Scottish Borders to the north and from Hexhamshire to the south-west. From time to time, the smoke has blown our way, enveloping our ground, house and steading in a choking, unpleasant fog.

The landlord setting fire to the hillside is an occupational hazard of tenant farming on a Ministry of Defense range, and there have frequently been fires here over the years. However, this one has spread further and carried on for longer than most.

When we first came here, there were fire-beaters strategically placed at various parts of the range, but they seem to have been removed, presumably to avoid the risk of anyone trying to use them.

b) Wait for rain

The fire brigade came out for a look on several occasions, but while a spokesman declared to the local press that the blaze was under control, the fire has quietly continued to burn and spread, occasionally flaring up. More than 750ha are estimated to have been burnt to date, including a Site of Special Scientific Interest.

Health and safety considerations apparently prevent firefighting in the “impact area”, because of the risk of an unexploded ordnance igniting. Fair enough. However, people around here are beginning to ask whether more could have been done to contain the fire at an earlier stage, even given those constraints.

While we have been experiencing an unusual period of dry weather lately – Otterburn is not noted as a great area for haymaking – dry conditions are not totally unprecedented.

There are questions about the handling of the outbreak of the fire itself. Apparently, a proposal to back-burn a section to form a firebreak was rejected by the army and there was no provision for remotely operated fire-fighting equipment.

Should there also have better preventative measures undertaken in the spring? What about more extensive heather burning and/or strip cutting, to create fire breaks?

Heather burning is often a tussle between the shepherds who want to do it to generate nutritious new-growth for their sheep, and conservationists who oppose it because it destroys habitat for ground-nesting birds and food supplies for invertebrates.

There is a balance to be struck between these interests, but the range fire seems to demonstrate that pro-active action to reduce fire risks is also in the interests of conservation.

More generally, perhaps it is time to consider whether livestock numbers, particularly of cattle, have been reduced too much in the uplands. Hill cattle have a very important part to play in managing the landscape and reducing the fire risk by eating down the rough moor pasture, which has proved so flammable.

Enthusiasts for rewilding should take note – removing the cattle and the sheep from the uplands is likely to result in a landscape of scrub, representing a huge, unnecessary fire risk.

Meanwhile in Otterburn, contrary to the forecasts, the sun has continued to shine and we await a monsoon to finally dampen things down.