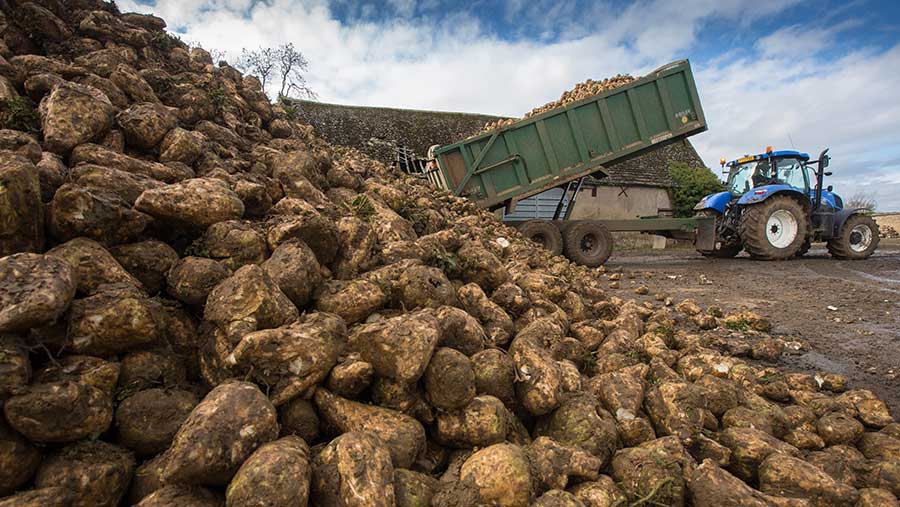 In 2017 we grew the biggest crop of sugar beet ever on our Grade 3 land.

To be fair, so did almost every other grower. The crop was drilled early, had rain when it needed it and enjoyed a favourable summer. The result was a high yield of roots that contained good sugar.

The return, despite prices that have trended downwards since the EU sugar beet regime reform, was satisfactory and helped the bottom line in the accounts.

This year the contrast has been dramatic. The late, cold spring delayed drilling by several weeks. Seed germination was OK, but the lack of rain and high temperatures through the summer inhibited growth. Yields – on this farm and I suspect on most others – are about 20t/ha down compared with 2017.

Sugar content in our first field lifted benefited from the sunny days and came in just shy of 20% against the standard 16%, which increases value – but not enough to compensate for the lack of yield or leave a profit.

Driving across Norfolk and Suffolk in recent days I have seen several clamps of lifted beet along roadsides. The sizes of the roots are tiny, just like ours, and also like ours, I suspect many that were even smaller fell through the chains on harvesters, still further reducing the weight to sell to British Sugar.

The only positives are the high sugar and the dry autumn, which has allowed lifting to take place without wrecking the land with ruts and mud, as so often in the past.

Crops that remain in the ground are still growing and those growers who are prepared to risk later lifting will benefit from higher yields.

But compared with last year, the sugar beet crop is a bit of a disaster and many farmers will be wondering whether to grow it next year, particularly as British Sugar’s contract price, based on world price of sugar, will be about £3.50/t lower than this year’s £22.50/t.

True, British Sugar will, in future, pay for the tops of beet, which it has not done before, and this will help raise returns a little. But there is a psychological barrier to growing beet at less than £20/t which may persuade some to give up and others to cut their acreage in favour of other break crops or continuous cereals.

The other negative factor is the likely withdrawal of neonicotinoid seed dressing. It had been hoped that sugar beet would remain exempt from the ban, but Defra has said it will not be allowed on either beet seed or rapeseed, about which there has been more publicity.

The fact is, the seed dressing has protected sugar beet from serious aphid attack for several years. Banning it will make the crop vulnerable to virus yellows if aphid numbers are high and, although many growers are too young to remember, it can be very serious indeed. For a couple of years in the mid 1970s the beet crop was decimated by the aphid-borne disease.

Furthermore, the chemical we ultimately used to control them – remember metasystox – is no longer legal. Something else to consider when drawing up future cropping plans…