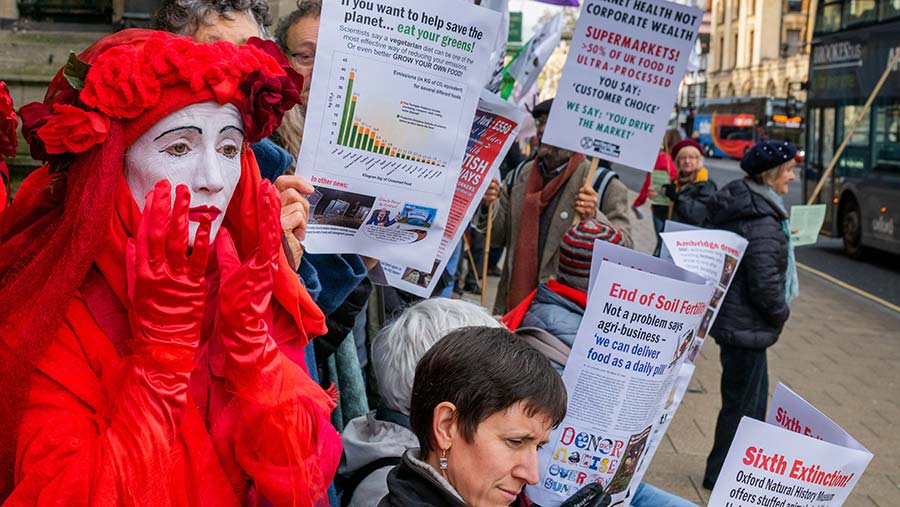 One of the things I look forward to the most at the Oxford Farming Conference every year are the conversations you inevitably have there with interesting people that you’ve never met before.

Whether fellow farmers looking to learn something, or CEOs of large-scale organisations, there’s always someone to talk to in the hallowed halls.

It was therefore something of a pleasant surprise to find that the most enjoyable and memorable chat I had this year was with members of the local Extinction Rebellion branch who were demonstrating outside.

In the build-up to the conference, wild and excitable rumours abounded about their expected presence. Would they shower delegates with abuse?

Would they glue themselves to the pavement, forcing us to gingerly tread around them in our standard farmer-comes-to-the-city attire of tweeds, moleskins and brogues?

Would pink-haired hippy types with – shock, horror – tattoos and piercings, accost us in the street and attempt to forcibly convert us to a diet of tofu and lentils?

A radical organisation? Really? It all sounded eminently sensible to me, and only echoed what I’ve been hearing from fellow farmers for years

Well, in the end, no. This group of concerned citizens of all ages and backgrounds, were polite, fun, charming and compelling in the case they were making – that the food system in this country is fundamentally broken and desperately requires change.

And here’s the thing; I couldn’t disagree with them.

During our conversation, I learned that they want to see smaller family farms able to make a decent living from the land. I do too.

They want a shorter and less complex food chain, with a greater share of the profit filtering down to working farmers. I do too.

They want to see a serious decrease in the use of agrochemicals and fertilisers where practical. I do too.

And they want to see significant government support made available to farmers to help finance environmental enhancements and farm in a more sustainable manner. I do too.

A radical organisation? Really? It all sounded eminently sensible to me, and only echoed what I’ve been hearing from fellow farmers for years.

Furthermore, the primary aim of Extinction Rebellion is to use non-violent civil disobedience to compel government to take action on climate change, something that is increasingly affecting farmers around the UK.

And a large amount of the talk within the conference itself was about how we can reduce our significant impact on the environment and meet the NFU’s ambition of reaching net zero by 2040.

Despite this, there will inevitably be those in farming who deny that we need to alter our practices, or indeed refuse to believe in climate change at all.

But in much the same way that I can’t take seriously people who believe that the world is flat, or that the moon landings were an elaborate hoax, I don’t engage with climate change deniers; I haven’t got the time or the inclination.

Over 97% of climate scientists now believe that humans are causing global warming, and I’m prepared to put my trust in them, not some angry bloke in the local pub or on social media.

The farming industry and Extinction Rebellion might seem unlikely bedfellows, and while we certainly won’t agree on everything, if you’ve ever felt cheated or demoralised by the present food system and would like things to change for the better, we have much more in common than you might think.