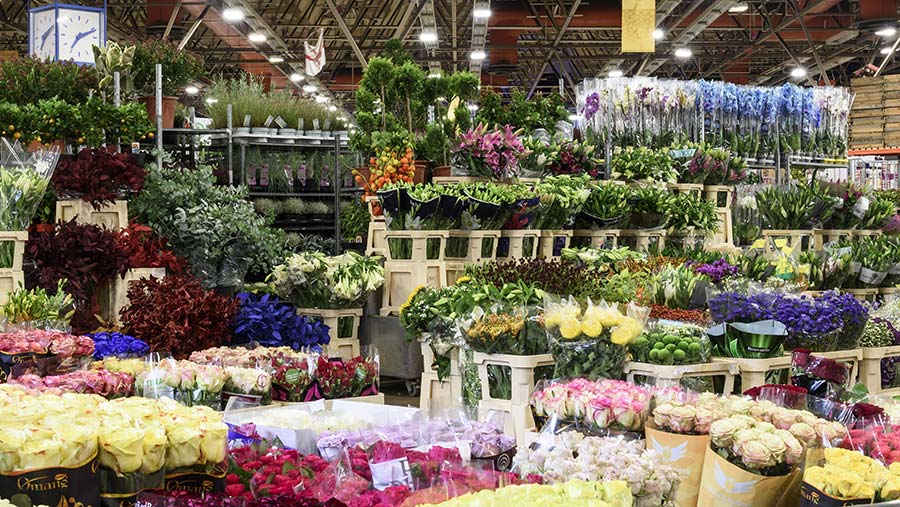 Many of you will be blissfully unaware that British Flowers Week has recently been and gone. This initiative, which was started by New Covent Garden Market, is a national event to celebrate the home-produced portion of the £2.2bn we spend on flowers and plants in the UK each year.

We held several events on our farm to mark it this year and we had customers visiting throughout the week.

We had cupcakes in a marquee decorated with bunting and old wooden crates and peonies in milk churns. This is the stuff people want to see when they visit a flower farm.

They don’t want to see the reality of how things are produced for supermarkets; a 32m Bateman sprayer, computer-driven Fendts or 6m cultivators. We have to hide that stuff away.

Instead, we decorated our old McCormick 414 and surrounded it with straw bales for added whimsy. I drew the line at wearing a smock, but I did wear a checked shirt.

See also: Wake up and smell the reality of Brexit, says Matthew Naylor

We had planned to take our visitors on a trailer tour of the flower fields, but fate intervened. That week we received the highest rainfall in the country, with just over 20cm of the stuff in seven days.

I have a perverse streak, so I’ll admit that it actually quite amused me that people had travelled from all corners of the country to sit in a draughty, rain-battered marquee. What, after all, could be more British than that?

Since most people in the cut flower industry work indoors, it was quite useful to show them the brutal reality of growing things outdoors.

Our customers regularly hear weather-related excuses from me about why yet another of our crops has failed to meet their needs. I know they think me an incompetent, meteorologically obsessed simpleton from the way our conversations go.

“Why are the flowers dirty?”

“Because the fields are flooded”

“Why don’t you invest in drainage then?”

“Because I spent all of our money on irrigation last year”

Society is now a long way removed from the challenges of farming. Most people are unused to standing on ground that isn’t hard-surfaced, or trying to work without a roof, double glazing and temperature control.

We need to keep bringing these people onto farms to show the increasing practical, technical and moral complexity we grapple with every day.

In western society, farmers are like the head of communications for Mother Nature. This is a role that even Sean Spicer, Donald Trump’s hapless former press spokesman, would turn down on the grounds of Mother Nature’s growing instability.

As the recent weather extremes should alert us, man-made climate change is a challenge that humanity needs to tackle with urgency and serious intent.

As farmers, we stand on the frontline of the issue and should be doing our bit to bring about the huge shift needed in human behaviour.