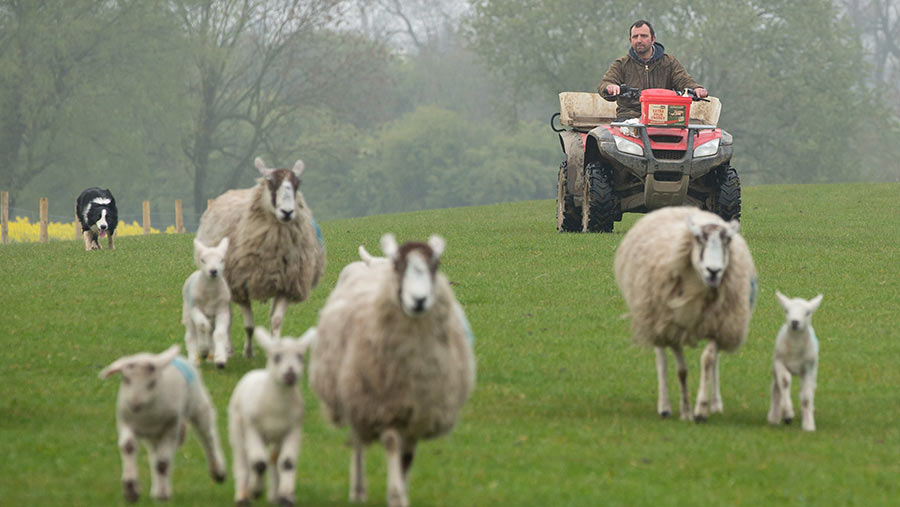 Livestock worrying is getting to be as common in this country as facial hair on young men. Everywhere you look, be it on the television or social media, there are horrific pictures of livestock that have been mutilated by dogs.

I always thought it would never happen to me, but it did. The whole affair, which ended up in court, still leaves a nasty taste in my mouth.

It was actually the day I was taking the Christmas decorations down – but instead of the proverbial partridge in a pear tree that’s associated with that day, I got a Rottweiler-cross in with my mid-pregnancy breeding ewes.

One of the best things about being a stock farmer is walking round your animals every morning and feeling that great sense of pride. That particular morning it was like walking into a scene out of the Vietnam war film, Platoon.

The lady owner had been walking the dog on a footpath, but it had run into the field. She went home to get her wellies, lead and car, so the dog was left in the field. The outcome was that I was eventually awarded compensation of nearly £2,000, because two sheep had to be put down, four more were injured plus there was damage to fencing.

Putting the circumstances of this case aside, there is a bigger question here. Whether it’s a dog or an owner that’s at fault?

James Read farms sheep and arable crops on 400ha, on the edge of the Lincolnshire Wolds at Louth. He and his wife Sally have a young son, Tom. You can find James, who also trains and trials sheepdogs, on Twitter at @jimreadfarmer

Nationwide, I’m convinced it has something to do with the number of fighting or guard dog types living in a domestic environment that aren’t being used for their proper purpose. Young men who want to get “buffed up” (muscle-bound) and cover their bodies in tattoos don’t typically choose as a Labradoodle or Shih Tzu to walk around with. They want what I see as more macho breeds.

There’s another factor, too. A few decades ago, the local bobby would have instantly shot a dog worrying sheep. Nobody wants that to happen to their family pet but, because of the mild penalties these days, dog owners have become blasé about letting their dogs off the lead near stock, not really thinking about the consequences.

Our farm has footpaths running all over it. The number of times I meet people with dogs off their leads near my sheep is unbelievable. When they are approached, they always say that their dog never chases sheep. I always reply: “It’s a dog. God made it to chase sheep”.

When I meet such people, I can’t help getting on my high horse because of their irresponsibility. It triggers that “protection” hormone in me to guard my flock. I imagine it’s a bit like when your teenage daughter brings her first boyfriend home.

I’m not saying all dog owners are irresponsible, but some are totally ignorant of what their dog is capable of and how the animal’s instinct can take over. I train many sheepdogs and initially all they want to do is to kill a sheep – they try to drag just one animal down.

For every sheepdog I train for farmers, I probably have the same number of dogs through my kennels from the general public that need putting off sheep. This normally involves me running like a lunatic across the field, chasing the dog as it is about to chase the sheep. In the sheepdog world, we call this “de-sheeping”. We also de-sheep collies that are not going to be any good for working sheep and are going back into society as a pet.

On a lighter note, but still on the canine theme, I’ve been trying to get my best sheepdog bitch, Sally (she shares the name with my wife) mated up.

This is proving quite difficult. I have two extremely well-bred male dogs in my kennels, both brothers to the international champion, Aled Owen’s Cap, but to put Sally to either of these would be far too simple. She will not have either of them. All she’s interested in is a badly bred, rather ugly, dog I have in for training. I think she must like a bit of rough (a bit like my wife, Sally – after all, she did marry me).

I had no alternative but to take Sally to Wales and to a nice “bed-and-breakfast” at Aled’s, to spend time with Cap himself. According to Aled, she still initially snarled her teeth (maybe she had a headache) but we eventually got there.

Dog breeding has never really gone smoothly on our farm. I remember when I was a young lad, Dad decided to mate two of Mum’s Jack Russells. It was all going well until Mum saw what was going on and promptly rung the local vet in horror and told him that these dogs were in a horrendous state and locked together back to back.

After nearly collapsing with laughter, the vet assured Mum that it was all “in the mating process” and they would be fine.

The vet was a regular down at the local and when Mum and Dad went for a Saturday night meal soon afterwards, there was a roar of laughter and applause led by Callum, when they walked in.