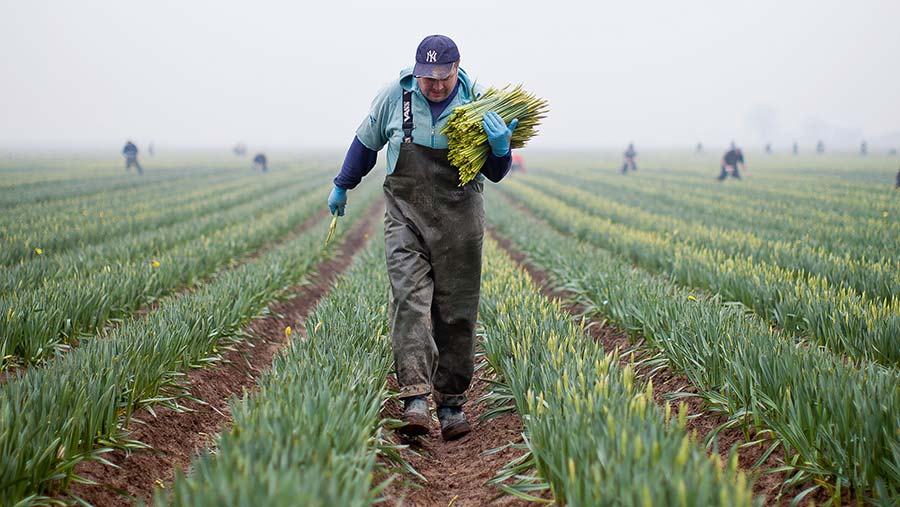 Spring is one of the busiest times on our farm. We are currently harvesting daffodils, drilling sunflowers and planting gladioli bulbs. At the time of writing, we have 240 people on the payroll.

Our business has grown quickly in the past 10 years, and of our workforce, less than twenty of us were born in the UK. The majority were born in Lithuania and Romania.

Some of them just come to us from January to April for the daffodil season, but many of them are now UK residents and work here all year round.

See also:  Farmers could be ‘sleepwalking into a mincing machine’

In the past, we employed our flower croppers through gangmasters, but we grew increasingly dissatisfied with the way staff were treated and so last year we started our own labour agency and hired all the staff directly ourselves.

Some people assume we prefer to employ eastern European people because they are prepared to work for less money.

If this were ever true, it certainly isn’t now. On average, our daffodil croppers are earning £11.50/hour and some of them routinely earn £900/week.

The majority of the workforce get a bigger wage than I do and I can’t tell you how much that delights me. When I was starting out, I harvested the flowers myself, so I know that they earn every penny.

The reason eastern Europeans are better at farmwork is that they are from countries that are culturally closer to agriculture. They understand that sometimes crops need to be harvested on a Sunday or when it is raining.

Growing flowers outdoors is a stressful business and so it is a great blessing to have a team of people who take pride in what they do and to know that we are all working towards the same goal.

This is why economic migrants are so valuable to an economy; they are willing to work hard to better their circumstances.

You have to take your hat off to anyone who moves to a country where they don’t speak the language, where the living costs are greater and where they have to start out by doing hard physical work.

This is the opposite of privilege. The UK should praise these people and their values much more than it currently does.

It isn’t overstating matters to say that eastern European workers saved the British vegetable industry from extinction when the British workforce stopped bending its back.

The government, consumers and the supermarkets would have quite happily let our entire vegetable industry move abroad if these hard-working people hadn’t arrived.

They are the real food heroes in this country and they get precious little thanks for what they do.

I don’t know much about the healthcare system, but my understanding is that it depends on eastern Europeans in the same way.

A lot of our team are now happily settled in the UK with children in local schools. I can’t wait until these second-generation migrants leave British schools – their ambition and work ethic will be a huge asset to the UK economy.

We are yet to see how the government decides to treat EU citizens working in the UK. If our politicians fail to honour economic migrants and recognise their huge contribution to the country, then they have an even weaker understanding of reality than I thought.