This was the cry across the lambing shed from my newly appointed 14-year-old lambing assistant, Ralph. After closer inspection of the newborn lamb I had to tell him: “Ralph, that’s his wedding tackle!”

We all made mistakes in our younger days. I made thousands. I was probably the teenager from hell for my parents – I seized on the fact that my parents were divorced, treating that as the green light to run amok. 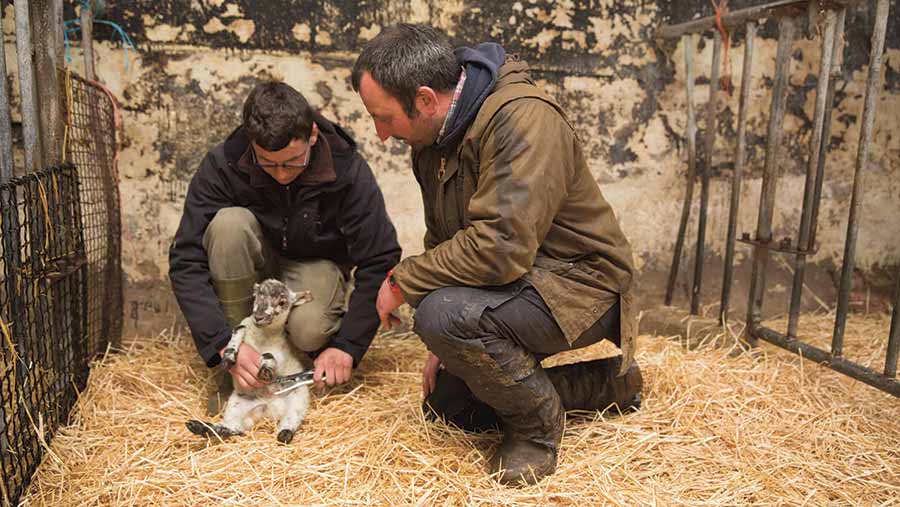 It’s this fear of mistakes that is the main reason why youngsters are not given a chance. Farmers can be bad in this respect – although it’s understandable, when there can be so much at stake. Whether it be controlling a 200hp tractor or foot-trimming a £3,000 Swaledale ram, you don’t want some enthusiastic but ultimately inexperienced newbie making a clanger.

I have found, however, that the younger generation can surprise you, given a chance. They might even drive that tractor or do that stock work better than you can.

During the past couple of years, there has been a massive wave of young people interested in getting into agriculture. About 25 years ago, when I was leaving school, I was the only one in my class – in the whole school, come to think of it – who wanted to go into agriculture.

Even the farmers’ sons all thought the grass had to be greener and headed off to university to read other subjects. I’m not sure what has led to this shift, but every Young Farmers’ Club in our area is full to the brim. This is absolutely fantastic, but these youngsters need a workplace and a chance to progress.

Over the past 30 years I have been farming, we have always had a young apprentice in some form or the other. Most of them fledged the nest and went on to bigger farms. One lad who was with us is now managing an 8,000- acre estate. I am still in touch with all of them and I always sense their gratitude towards me for giving them that chance.

I have worked with the older as well as the younger generation. One of the great traits of more mature people is their reliability – an attribute that can be paramount on a farm.

This can work the other way, however. I was once drilling a field with what looked like about half an hour to spare before it rained.

The old chap working the land with me stopped for his dinner, because that was his routine – he always did at that time. Sure enough, the heavens opened and we weren’t able to finish the job.

Sometimes the adage “you can’t teach an old dog new tricks” is very true and youngsters can be more easily steered and moulded to your way of thinking. A bit of new blood can liven up the workforce, too.

This year, I had a lot of enquiries from youngsters offering their services, as the Easter holidays couldn’t have fallen any better for lambing.

Ralph, who is the local vet’s son, was the pick of the bunch. His first day was very tiring for me, as he asked many questions.

Don’t get me wrong – an inquiring mind is a great sign, but I’d already been bombarded by questions that morning from my two-year-old son Tom, so was perhaps less receptive than I should have been. It felt as if I was being interrogated.

After reminding him that the job application was for a trainee shepherd and not a policeman, we laughed and got off to a flying start.

He subsequently proved himself extremely capable and worked tirelessly through his holiday with great dedication towards the flock and, like a lot of youngsters we’ve had here, with great enthusiasm.

I knew Ralph would be a good chap, as a few years ago my old sheepdog bitch, Jess, was pushed against some iron railings by a great mob of sheep and badly injured her leg, two months before the English Sheepdog Nationals.

Ralph’s mum miraculously saved her leg and sewed it back together. Jess ran at the Nationals, even though we had all initially feared she might lose her leg.

Ralph takes after his mum in many ways and is destined for greater heights than my lambing shed. It gives me a great sense of pride to think that maybe I have given him a little helping hand in his career.

One of the reasons I am a such a big believer in the younger generation is because, after being a terrible teenager, I got thrown in at the deep end. After spending a year farming in Australia, my dad fell ill, so I had to take over the reins.

This was not as bad as it could have been, as Dad had always let me have a go. He would let me drive the combine at dinnertime and, dare I say it, if the drill man was off sick, he would let me bunk off school to drive the drill.

Being given responsibility from a young age didn’t do me any harm (although I do now have the same colour hair as a badger). There are farmers’ sons of a similar age to me who still haven’t sold a grain of wheat or bid in a local market, so I thank my dad for that.

The fact is, more mums and dads need to do the same and trust their kids with more decision-making at a younger age. That means handing over the cheque book, too.

James Read farms sheep and arable crops on 400ha, on the edge of the Lincolnshire Wolds at Louth. He and his wife Sally have a young son, Tom.