An organised crime group that was selling horsemeat in Europe unfit for human consumption has been broken up by police.

A total of 66 people were arrested in the Spanish-led operation, which was carried out in co-ordination with authorities in Belgium, France, Italy, Portugal, Romania, Switzerland and the UK.

In Spain, 65 people were arrested and charged with crimes such as animal abuse, document forgery, perverting the course of justice, crimes against public health, money laundering and being part of a criminal organisation.

See also: ‘Up to 50,000 horses disappeared in horsemeat scandal’

The chief suspect, a Dutch businessman, was arrested in Belgium in April.

The EU’s police agency Europol said the unnamed Dutchman led the operation from Calpe in Alicante, on Spain’s Costa Blanca, where he put “his most trusted men in charge in every country affected by the scam”.

The case was linked to the 2013 horsemeat scandal in which Irish authorities detected horsemeat being sold in beef products.

Mislabelled meat products were later found on supermarket shelves in a number of European countries, including the UK. 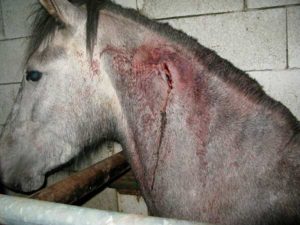 In a statement, Europol said: “Horses in bad shape, too old or simply labelled as ‘not suitable for consumption’ were being slaughtered in two different slaughterhouses.

“The animals came from Portugal and several places in northern Spain, their meat was processed in a specific facility and from there sent to Belgium, which is one of the biggest horsemeat exporters in the European Union.

“The criminal organisation forged the animals’ identification by modifying theirs microchips and documentation.”

During the searches at the slaughterhouses and facilities, several samples were taken.

The results concluded that the destination of the horsemeat was mainly outside of Spain because the samples in Spain matched those found abroad.

Investigators concluded that the Spanish element of this organisation was a small part of the whole European structure controlled by the Dutch suspect.

The Spanish Civil Guard said that the profits from the illegal meat could reach €20m (£17.5m) a year.