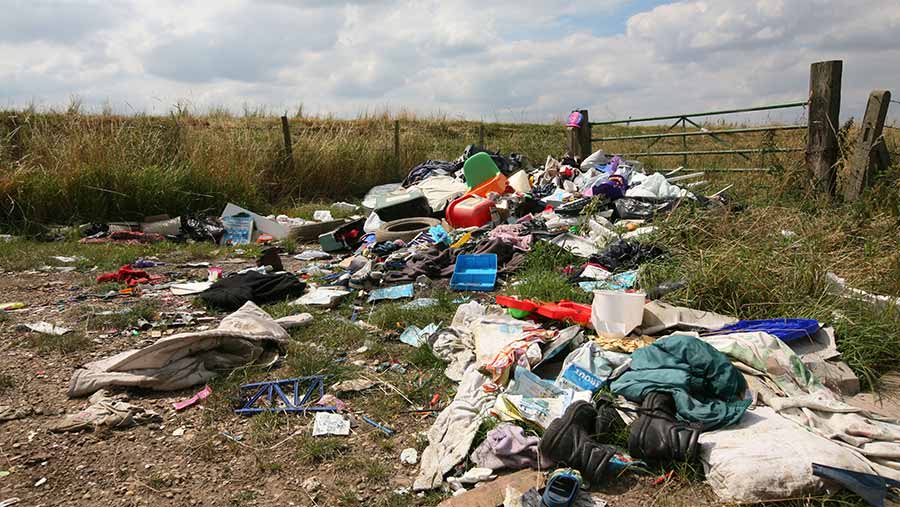 Landowners who are victims of fly-tipping on private land currently face the “double whammy” of having to clear the waste themselves.

This is because under current UK environmental legislation, the responsibility to remove waste dumped on private land lies with the landowner.

The Country, Land and Business Association (CLA) is calling on the UK government to introduce – or at least pilot – a ticketing system that would allow private landowners to remove waste dumped on their land and take it to a local council tip free of charge.

A Farmers Weekly survey on fly-tipping, as part of our Stop the Blot campaign, in association with the CLA, found that one of the biggest frustrations among farm fly-tipping victims is that they are also landed with the clean-up bill.

Defra plans to tackle fly-tipping by using powers to seize the vehicles of rural criminals caught committing waste crime. The department is also consulting on plans to give councils powers to hand out on-the-spot fines of £400.

But environment minister Therese Coffey says Defra has no plans to introduce a scheme that would allow private landowners to remove waste dumped on their land for free and council waste recycling centres.

Ms Coffey said: “I recognise that fly-tipping on private land is more complex. Local authorities, as you are aware, are not under the obligation [to help].

“I think the concern about providing free clear-up is that just gives more incentive to more illegal dumping and aspects like that, and reducing incentives for landowners to protect their land.”

What do you think? Have your say in our poll.