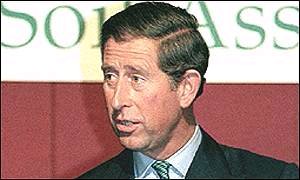 PRINCE Charles is to visit farmers in Sussex this week to promote locally produced food and farming in the village of Fletching.

The Prince will meet farmers, food processors and retailers who are members of the regional group called A taste of the South East.

He will meet several livestock producers who are selling food direct to the public, including a farming family who have developed an award-winning cheese.

Jo Cummings, the group‘s regional director, said the visit would be a boost for local farmers who have been working hard to raise the profile of Sussex food.

“This is a fantastic seal of approval,” she said.

“The Prince of Wales is a well-known champion of regional foods and has a thorough understanding of many of the issues affecting producers all along the food chain.”

The Prince, who farms organically at his Highgrove estate, Gloucestershire, has strong views on agriculture.

He has spoken out against GM crops, and described the loss of small family farms in remote communities “a national disgrace”.