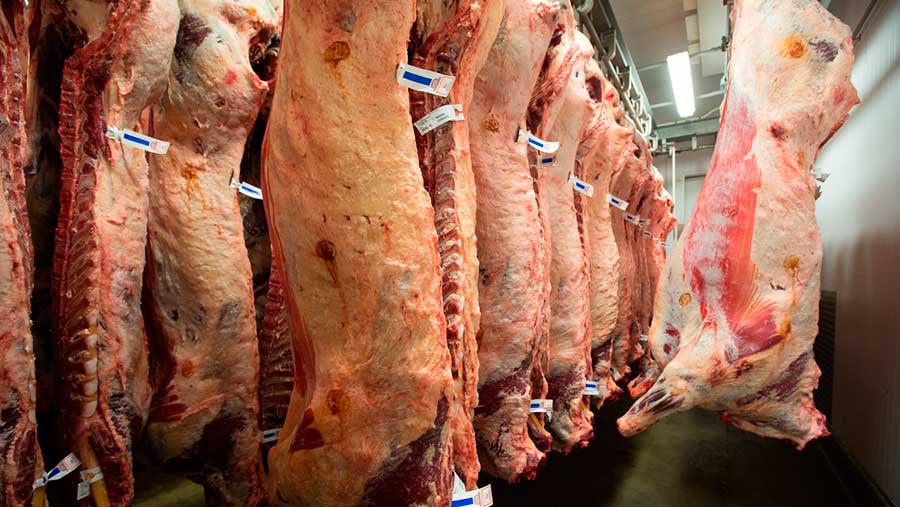 The Scottish meat industry is playing down claims that inferior beef is being deliberately mislabelled as a premium product so it can be sold for a higher price.

Mislabelling of meat is one of the main issues encountered by investigators, according to Duncan Smith, intelligence manager at Food Standards Scotland’s new food crime unit.

“Foreign meat is coming into Scotland and is then getting processed and put out to the customer as premium Scottish beef – when it’s not,” he told BBC Farming Today.

“Unfortunately, on occasions, what the public are being sold is an inferior quality beef, which hasn’t come from farm-assured sources.

“It isn’t the same quality they would expect for the price.”

Mr Smith said inferior quality beef could be coming into Scotland from a number of places in Europe, including Ireland and England.

“No one is saying for one minute that this meat is unsafe, but what it is not is Scottish beef – it is not the premium quality beef that the public think they are buying.”

Although the practice was not widespread, the Scottish Food Crime and Incident (SFCIU) was looking into several reports that mislabelling was “ongoing by meat processors,” said Mr Smith.

Quality Meat Scotland, the Scottish government body that promotes the red meat sector, said it was important to put any isolated reports of deliberate mislabelling into context.

Such reports sat alongside hundreds of other reports that Food Standards Scotland was dealing with relating to the wider food industry, said QMS chairman Jim McLaren.

“It is also important to bear in mind that our industry is frequently subjected to unfounded allegations from those with an anti-red meat agenda or from disgruntled former employees.”

Mr Smith said he understood that the SFCIU was looking into the credibility of some claims of poor practice – but there was no suggestion of a formal investigation.

“If at any time they have any evidence that any isolated case of poor practice is taking place, they will have our industry’s 100% support that action is taken very quickly to stamp this out.

The Food Standards Agency said there was no human health implication.

Ian McWatt, director of operations at Food Standards Scotland, confirmed there was no current investigation into the Scottish beef industry and no suggestion of any wrongdoing.

“It is important to understand that the SFCIU receives regular claims from people alleging fraud involving different food types,” he said.

“The unit’s normal process is to carefully consider how credible and robust these claims are. Only once credibility is established would an investigation commence.”