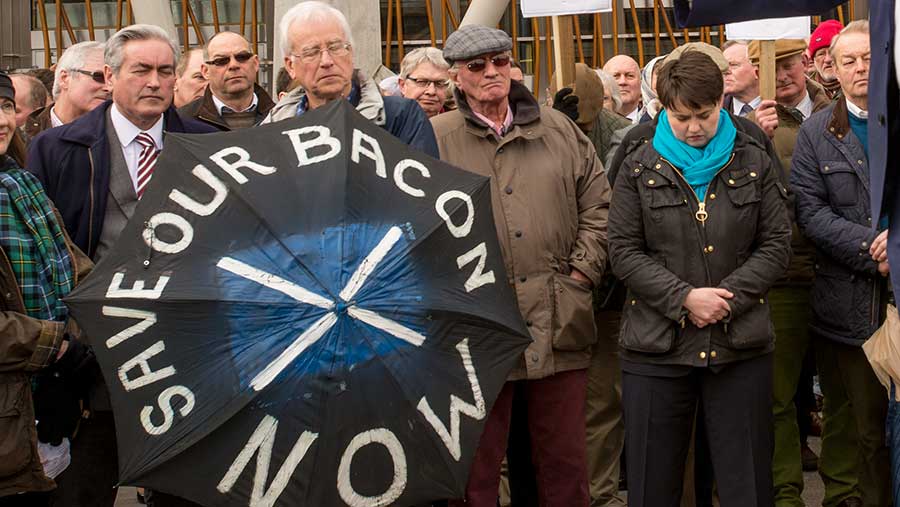 Farmers from across Scotland joined a protest at Holyrood to highlight the cashflow crisis engulfing agriculture.

About 150 Scottish farmers and crofters gathered for the rally on Thursday morning (10 March), brandishing banners saying “No farmers, no food”, “Less bull, more backing”, “Sort the mess with the farmers” and “Trust local, buy Scottish”.

The protest, led by NFU Scotland, aimed to highlight to Scottish politicians and MSPs the importance of a vibrant rural economy.

With prices for almost every farm commodity on the floor, Scottish farmers and crofters have also had to endure late payments in one of the wettest winters on record.

To date, Scottish government has paid only £103m of basic payments out of a total budget of almost £400m. 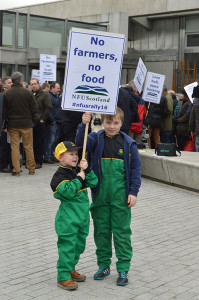 NFU Scotland said a key reason behind the farm cashflow crisis was the Scottish government’s problems delivering support payments to farmers and crofters following its £178m investment in a “flawed” IT system.

Earlier this week, first minister Nicola Sturgeon pledged £200m of public funds to pay farmers 80% of their BPS, for anyone who has not received their payment by the end of this month.

NFUS president Allan Bowie told farmers at the protest he wanted all Scottish MSPs to understand farming’s position as the cornerstone of the whole rural community is under threat ahead of the Scottish parliament elections in May.

“The failure to properly deliver farm support payments to the sector this spring has blown a hole in the rural economy,” said Mr Bowie.

“That has shown how vulnerable farming businesses are and how reliant hundreds of businesses and thousands of jobs are on primary producers.”

He said an election was looming, farmers’ voices matter and the politicians were listening, adding: “Let’s see what they can deliver.”

Deputy first minister John Swinney told farmers he understood the crisis they were suffering and he was listening to their views.

Scottish rural affairs secretary Richard Lochhead, who has faced intense criticism for his handling of the botched BPS system, was heckled as he addressed the crowd.

Mr Lochhead said he agreed with the sentiment of many of the banners. Nonetheless, some  protesters called for his resignation after he finished his speech.