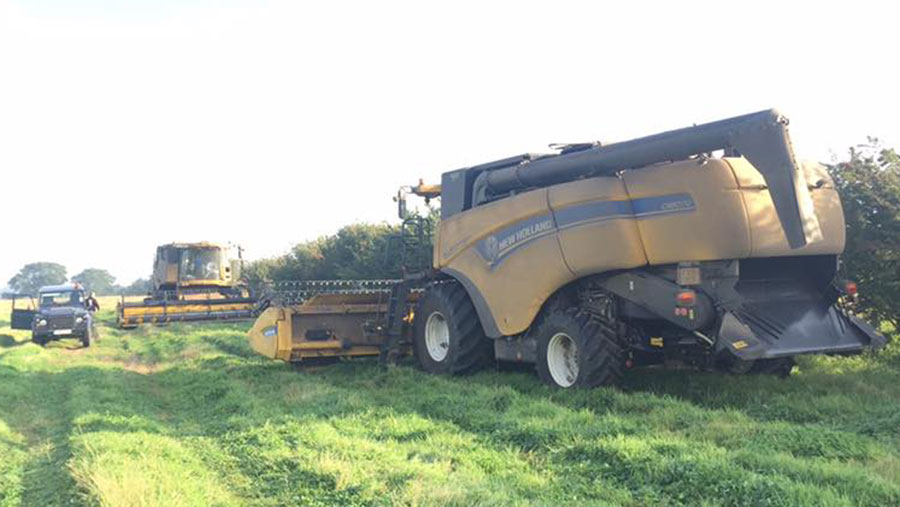 Thousands of pounds worth of damage were caused to the two machines, said Angus Treadgold, who works for KW Farm Contractors at Waddingham, 16 miles north of Lincoln.

Mr Treadgold told Farmers Weekly how he and a work colleague discovered the break-in when he went to service the machines at 8am on Monday (28 August).

The combines were parked up out of sight at North Owersby, near Market Rasen, said Mr Treadgold, who estimated the damage will cost £5,000 to put right.

“We got there to find the fire extinguishers had been taken off steps and put through the windows – the cabs had been completely raided,” said Mr Treadgold.

“The thieves took everything that wasn’t bolted down.”

“There were tyre marks all around the machines – they had driven across several fields.”

Mr Treadgold said he did not think the farm had been singled out or targeted because there had been a number of farm thefts in the area over recent months.

“There is all sorts of stuff being stolen – Land Rovers, tractors and other equipment. I certainly don’t think we are being personally targeted.”

The cost of farm theft rose by 5% to almost £2.5m last year, according to the latest rural crime figures from insurer NFU Mutual.

Mr Treadgold said the farm had suffered a number of thefts over recent years.

Thieves are becoming more brazen – and it appears in this instance that the crooks had come prepared and well-equipped.

“They had come with enough capacity and equipment to drain 500 litres of diesel and take it away,” said Mr Treadgold.

Local New Holland dealer Lincolnshire Motors had been as helpful as possible, but the downtime had been costly at an important time of year.

“Apart from anything else, it was Bank Holiday Monday when we found the machines and we haven’t been able to go combining since.”