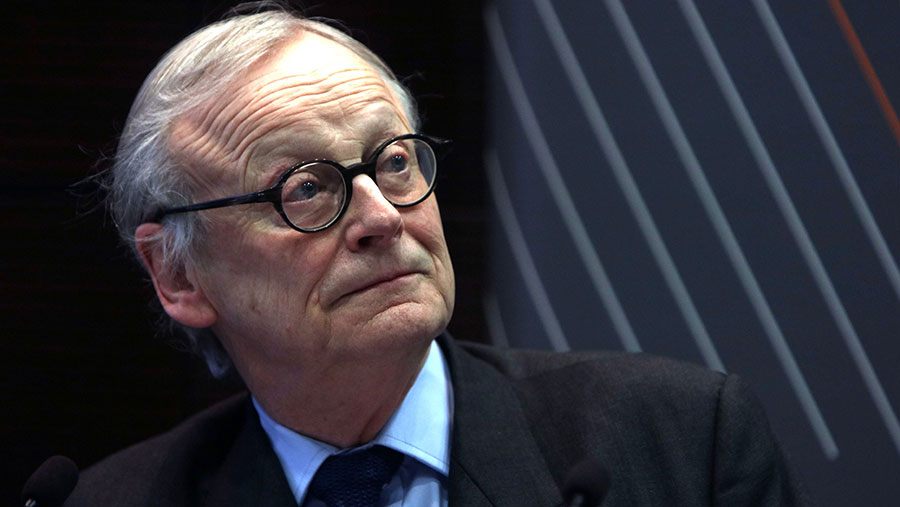 Farmers who believe they would be better off if the UK left the EU are “living in cloud cuckoo land”, former agriculture minister Lord Deben has warned.

The veteran politician was speaking at an in-out referendum debate at Debenham Community Centre, Suffolk, on Friday 15 April.

Organised by the Farming Community Network (FCN), the event was attended by almost 100 local farmers and agricultural professionals.

Lord Deben, who as John Gummer served as agriculture minister from 1989-93, said farmers would receive less support from a UK government outside the EU.

“No British Treasury – even a Tory Treasury – would give us anything like the £3bn we receive now,” he told the audience.

He added: “I do not believe farming would be supported as it is now.”

Lord Deben said he was speaking as someone who had been involved with negotiations with the Treasury and Brussels during his time as agriculture minister.

No ‘free trade’ outside the EU

Outside the EU, the UK would only be able to trade freely with other European countries if it met the same requirements as those countries which were members, he said.

It was “cloud cuckoo land” to think that UK food and drink products would not be subjected to tariffs if the referendum resulted in the UK leaving the EU, said Lord Deben.

“Were we out, we would have significantly less support,” he added.

“I have to say – with a largely metropolitan House of Parliament – you would not get it. And you would be exporting over a tariff.”

Ukip MEP and Norfolk farmer Stuart Agnew argued the case in favour of the UK leaving the EU. Agriculture would be better off outside the EU, he said.

On CAP support, Mr Agnew said: “You have had the best of it without the shadow of a doubt.”

CAP cake ‘is on the crumble’

Farmers were receiving less from the CAP than they did 20 years ago and further reductions were likely, he added.

“The cake is on the crumble,” said Mr Agnew. The CAP’s share of the EU budget had fallen from 80% to less than 40% in a generation, he added.

New member states would all be net recipients, taking more from the CAP than they contributed towards it. This meant there would be less to share around.

It was a fallacy to believe that UK farmers would be worse off outside the EU, said Mr Agnew.

No British government would pull the rug from under the agricultural industry if the UK left the EU, he told the audience.

“In short, you would get a rural meltdown,” he said. “Do we really want that?”

As well as ensuring British farmers were better supported, leaving the EU would enable the UK to “take back control” when it came to issues such as food labelling.

Free from Brussels, a UK government would be able to ensure that food and drink labelled British actually were British, said Mr Agnew.