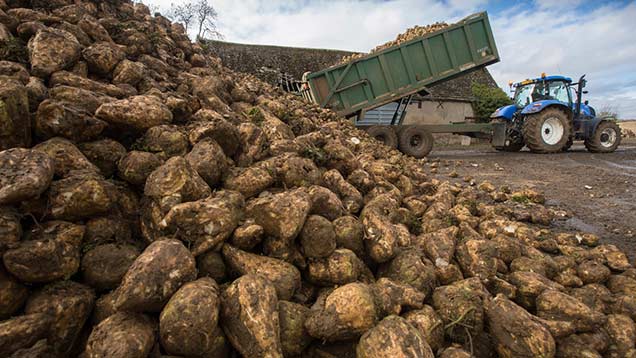 But growers face challenging times ahead with lower prices, the end of EU sugar quotas and a reduction in the sugar beet area for 2015-16.

Sugar production is forecast to increase by 6% this year – buoyed by good extraction rates and record performances at all four British Sugar factories.

British Sugar agriculture director Colm McKay said: “Growers are reporting exceptional yields to date in all of our factory areas.”

He added: “This combined with record-breaking factory throughputs at all our sites should result in an excellent campaign all round.

“The prospects for the final outturn for yield are very promising but will be dependent on weather conditions for the remainder of the campaign.”

More than 1m tonnes of sugar beet have already been processed at British Sugar’s Cantley factory in Norfolk this season – with a record amount expected to be sliced by the campaign end.

“Sugar content in the beet is lower than last year but we are benefiting from good extraction rates,” said a trading update from British Sugar parent company ABF.

With European sugar beet lifting and processing in full swing, this season’s campaign was going “extremely well,” added the update.

But there are challenging times ahead – including increased competition following the end of EU sugar quotas in 2017.

At the same time, British Sugar has reduced the amount of beet it wants from growers next season.

An appeal for growers to take a contract “holiday” has resulted in farmers representing 11% of the national crop voluntarily agreeing not to grow beet in 2015-16.

British Sugar then announced it was implementing a further 9% cut across the board, reducing the 2015 contract tonnage by a total of 20%.

Lower EU sugar prices have led to lower revenues and margins for AB Sugar in both the UK and Spain, although there has been some stabilisation.

“With the fall in EU sugar prices and weakness in the world sugar price, we expect a further large reduction in profit from AB Sugar,” said the trading statement.