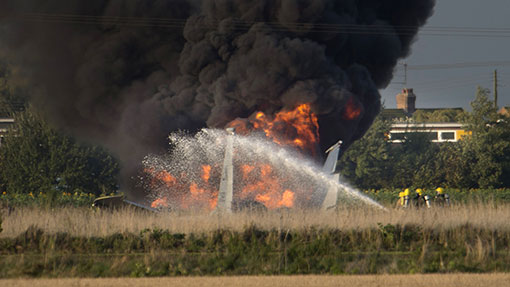 A Lincolnshire farmer could lose an £18,000 potato crop after a US fighter jet crashed into his field of spuds.

The pilot of the single-seat F-15D jet managed to eject from the cockpit before crashing into the 3ha field of potatoes in Weston Hills, near Spalding.

Shocked farmer Tim Clay of Holly House Farm, Whapolde, was due to harvest the field at the weekend. However, he now faces losing the crop, which has been cordoned off for investigation, if he cannot get on there in time.

The crop of Maris Piper was destined for pre-packing or frying and Mr Clay expected it to yield about 50t/ha, which could receive in excess of £18,000.

“With potatoes that are destined for frying if you don’t get them up in October and it turns cold then they can quickly lose their quality and value,” he said.

With low prices this year, achieving the top-quality frying potato could make a big difference to his business, he added.

“We are still unsure on when we will be allowed back on, but even if it is next spring we will still need to lift the potatoes at some point.”

The following winter wheat crop that was due to be drilled in two weeks time may also be affected if Mr Clay is unable to harvest the potato crop in time.

And he pointed out there could be further problems if the soil was contaminated from the wreckage, such as a fuel spillage, and he was unable to grow a root crop on the land.

Mr Clay has vowed to claim compensation following the incident. He hopes to have a “little less drama” harvesting his remaining 20ha of spuds.

“We’re looking at our options at the minute and seeing what is available to us. Things may change and we might get on the land sooner than thought, but I doubt it,” he added.

The £19m jet crashed into the field on Wednesday (8 October) while conducting a combat training mission, according to a statement released by the US military.

The area remains cordoned off and is being monitored by Lincolnshire Police and the MoD Police.

Lincolnshire police community inspector Jim Tyner said: “It is very important that the forensic integrity of the scene is maintained in order that air crash investigators can carry out their work.

“Anyone discovered breaching the cordon could find themselves in serious trouble and any attempt by souvenir hunters to remove parts of the debris will be treated as theft.”