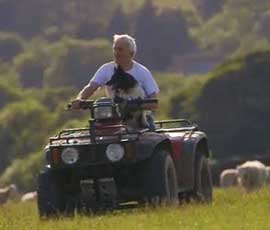 A Derbyshire farmer has come forward to warn other farmers of a scam where he was almost cheated out of £20,000.

Eddie Wilmot was cold-called and  ‘groomed’ by scammers in the US for several months, who convinced him that he had come into an inheritance.

As an experience stock market investor, Mr Wilmot was sceptical but after months of correspondence he was persuaded the scheme was genuine.

Mr Wilmot was on the verge of investing £20,000 when the Financial Conduct Authority (FCA) was alerted to the scam by their US counterparts.

The FCA stepped in and Mr Wilmot was informed of the fraud before he released the funds.

Mr Wilmot has spoken out in this video about his experience to help protect other farmers from being duped in the same way.

His experience shows that even the most savvy investors can be caught out by highly organised and sophisticated scams.

Tips on how to protect yourself against scams:

An FCA spokesperson said: “Mr Wilmot’s case is not a one-off. We’ve seen a variety of professional people being scammed. This was a complicated scam which involved a series of calls and emails.

“An FCA-authorised financial company is very unlikely to contact you out of the blue with an investment opportunity. We would urge anyone who is approached to seriously consider if it is genuine.”

The FCA warns consumers to be especially careful with overseas scammers, who do not come under their jurisdiction.

“If you are dealing with a company based abroad, check how they are regulated. If you deal with an unregulated company, and something goes wrong, you are very unlikely to be able to get your money back.

“Remember, if an offer sounds too good to be true, it probably is.”

Watch the video to hear Mr Wilmot talk about his experience.

See more on our crime page