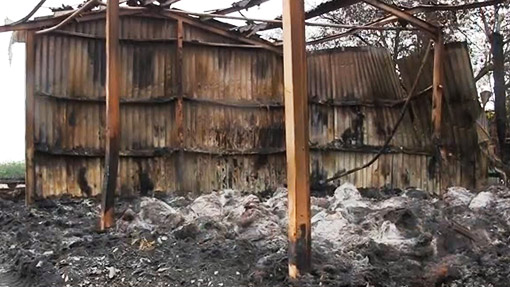 A spate of farm fires has seen four barns go up in flames on the Isle of Sheppey, Kent.

The latest fire destroyed a hay and straw business belonging to Minster-on-Sea farmer Will Lawrence.

Mr Lawrence estimates the fire has cost him more than £350,000. He has vowed to rebuild his business – but only when those responsible for the fires have been caught.

Meanwhile, farmer Stephen Attwood is offering £10,000 reward for information resulting in the conviction of arsonists who caused £450,000 of damage after a fire ripped through a barn at Wallend Farm in Lower Road, Minster, on 1 August.

This week, Kent Police arrested a 36 year old man on suspicion of arson. But detectives are pursuing a number of ongoing lines of enquiry, saying there are “other people we would like to speak to” in connection with the incidents.

Anybody with any information about the Isle of Sheppey fires are urged to contact investigating officer PC Robin Stump on 07980 683675, quoting crime reference XY/029871/14.

Alternatively, anonymous calls can be made to Kent Crimestoppers on 0800 555111.