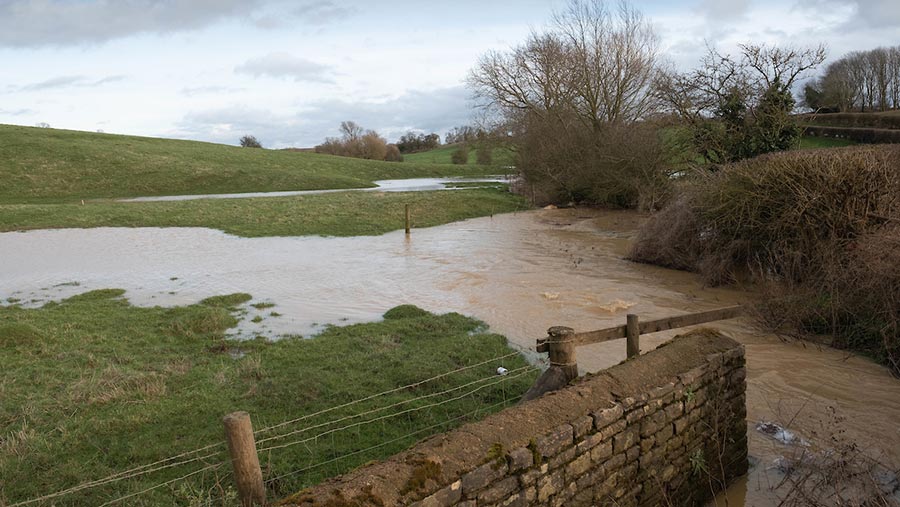 The winter of 2019-20 is heading to be one of the wettest on record since national records began, according to the Met Office.

Since last autumn, persistent spells of powerful storms and heavy rainfall have brought widespread flooding to farms. It follows a recent pattern of wet and mild, stormy winters in 2012-13 and 2015-16.

Hedgehopping some of our flooded fields with the drone today. Record breaking flood here, we're just not sure what the record is because all of the gauges near us have maxed out! #StormDennis pic.twitter.com/tqAlpPxNYK

Relentless rain, including two storms in two weeks, has left many farms under water and the UK Farming Roundtable says the flooding situation is “unprecedented”.

The group, which comprises of the NFU, Country Land and Business Association, Tenant Farmers Association and others, has called on Defra to extend its Farming Recovery Fund to help flood-hit farmers cover any uninsurable losses.

In a statement to parliament on Monday 25 February, Defra secretary George Eustice said: “We have had an incredibly wet winter. Some areas have already received almost double their average rainfall for February, with others experiencing a month’s worth of rain in just 24 hours. Records have been broken.”

Mr Eustice said storms Ciara and Dennis had affected thousands of acres of farmland. But he would only confirm that the government “will consider the need to extend the Farming Recovery Fund, once we have all of the necessary data”.

Farmers are becoming increasingly vulnerable to flooding and they will have to adapt their businesses and adopt environmental management practices to meet these changes.