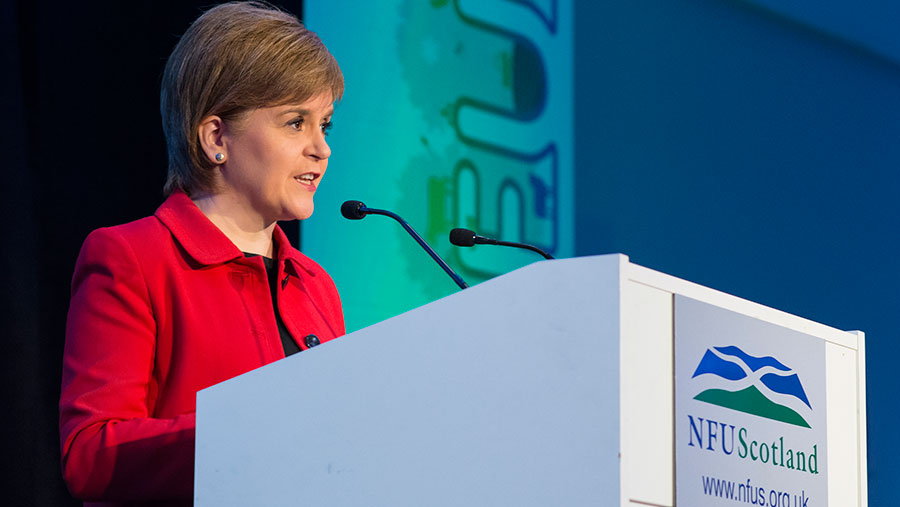 Scotland’s first minister, Nicola Sturgeon, says it is “vital” farming powers are transferred from the EU to Holyrood at the time of Brexit.

Speaking at the NFU conference on Tuesday (7 February), Ms Sturgeon said agriculture was a devolved issue, and as such, Scotland and not Westminster should determine its own policies as far as possible.

This was the best way of ensuring future decisions on farming reflect Scotland’s distinct priorities, she added.

Ms Sturgeon’s comments would appear to put her on a collision course with Defra ministers who have advocated that a British agricultural policy should replace UK farming’s membership of the CAP.

On Monday (6 February), Ruth Davidson, leader of the Scottish Conservatives, predicted “an almighty political row over the coming months about whether Holyrood or Westminster should be running agriculture”.

But Ms Sturgeon said Brexit presented “the biggest challenge to farming in our generation”.

“Agriculture is a more important part of Scotland’s economy than the UK because of our landscape and climate,” she said.

“So it’s important for the agriculture sector that Scotland has a strong say in the negotiations with the EU.”

Ms Sturgeon said she wanted Scotland to remain a member of the EU single market after Brexit.

But she admitted this would be difficult to achieve politically if Theresa May’s government leaves the single market.

In her conference address, Ms Sturgeon revealed that next month Scottish government will launch a new food and drink strategy which will set out priorities and actions for the sector until 2030.

“At its very heart will be actions to strengthen the position of farmers in the supply chain,” she said.

“We should not have a situation where a food and drink sector is booming, but those who produce that food and drink are struggling to make ends meet.”

Ms Sturgeon also stressed it was vital to make the sector as sustainable and efficient as possible by encouraging new entrants and more women to work in agriculture.

Scottish government was exploring new opportunities to get more young farmers on tenanted and publicly owned farmland, she said.

“The UK government has guaranteed payments up until 2019. Since farming will need to be funded after this period, there also needs to be guarantees for provision of funding beyond 2020.

“For many farmers, these payments are the difference between making a profit, or breaking even… That support needs to continue.”

“100% of Scottish farmers will be able to access superfast broadband by the end of the next Scottish parliament.”

“Scotland must remain an open, diverse and welcoming country after Brexit.”