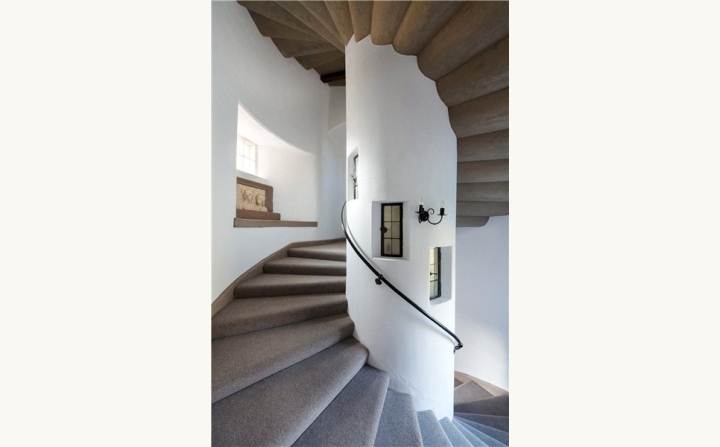 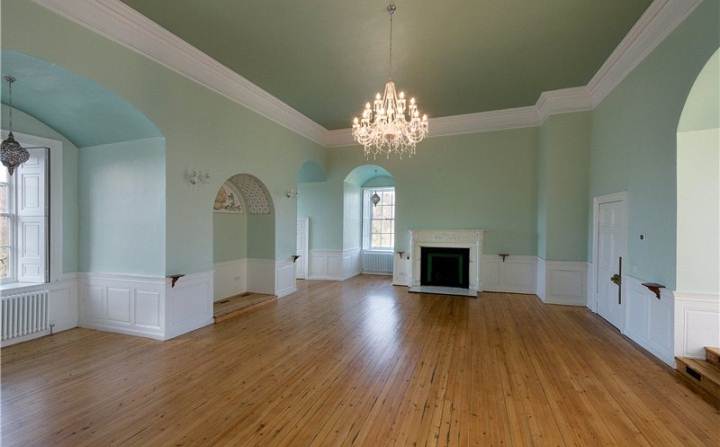 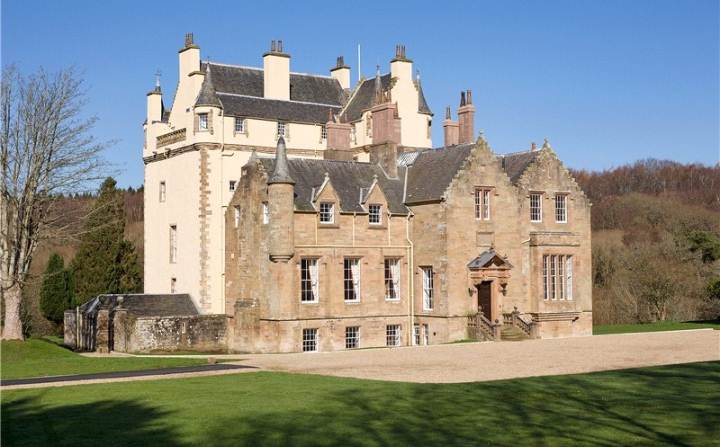 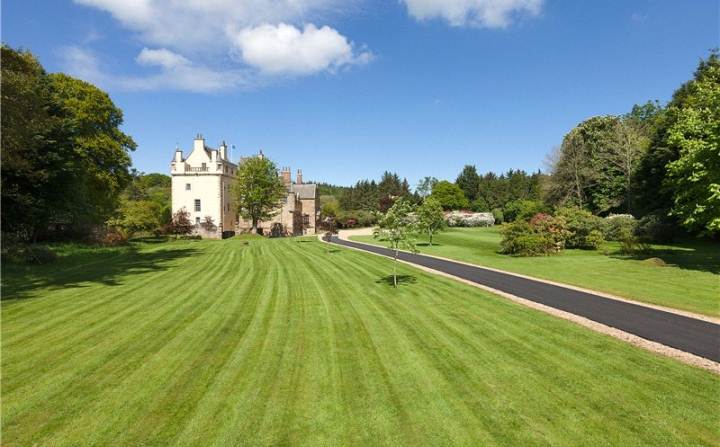 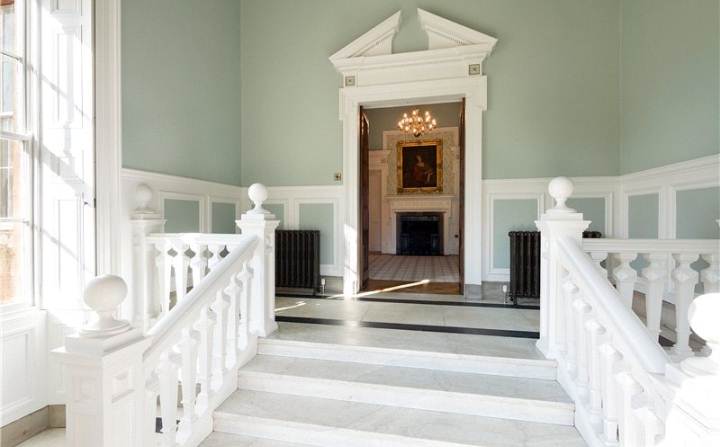 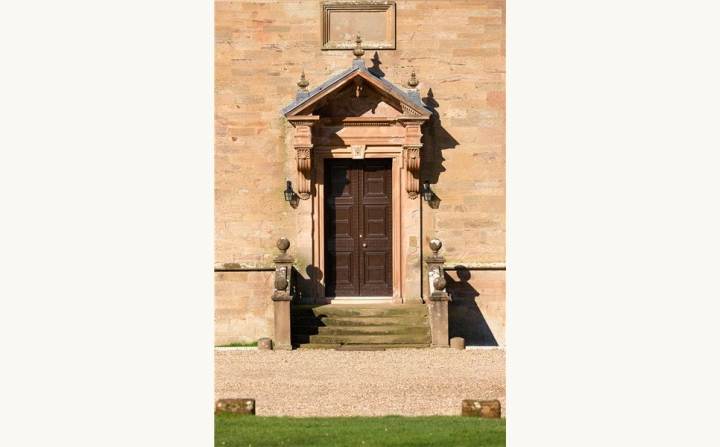 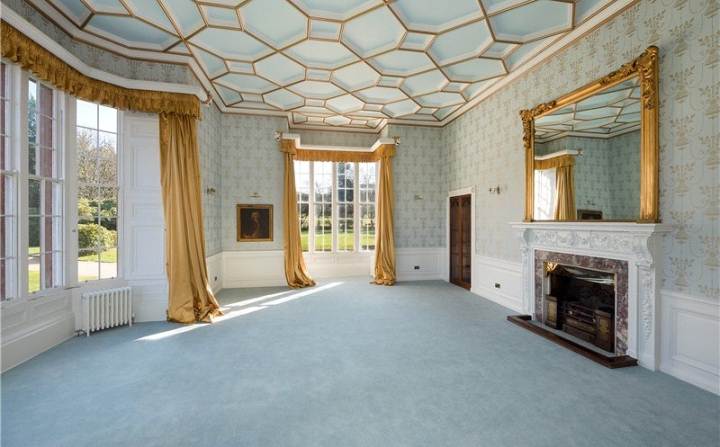 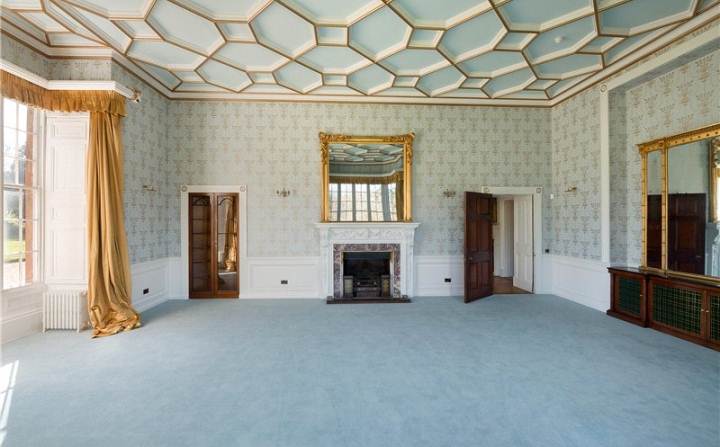 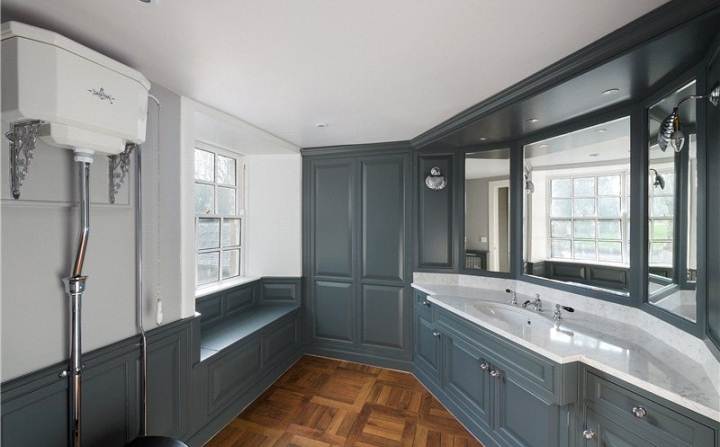 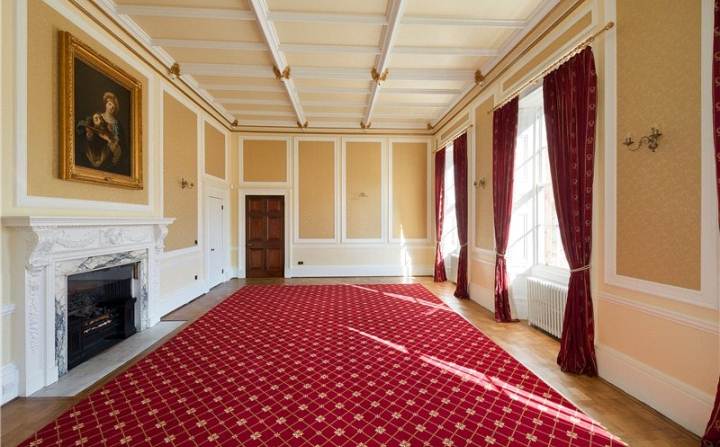 An imposing castle standing high above the River Doon
steeped in history and restored for 21st century living.

The castle, with attendant gate lodge, garden cottage and walled garden, coach house and stable block, stands in 310 acres of policies and grass parks in rolling South Ayrshire countryside only a short distance from the coast.

Ayr is about 7 miles to the north and provides a wide range of shops, supermarkets, professional services and schools, most notably Wellington School which offers private coeducation.
The Ayrshire coast is famous worldwide for golf, with championship courses at Royal Troon, Prestwick and Turnberry, all of which have hosted the Open Championship. Ayr Racecourse has regular race meetings and hosts the Scottish Grand National.   Glasgow City Centre is easily accessible by both rail and road and is widely regarded as a vibrant and dynamic city with one of the UK’s best shopping districts. Edinburgh, Scotland’s famous capital city, lies just over 93 miles to the northeast.

The south west of Scotland is noted for its field sports, including pheasant, partridge and grouse shooting. Red, roe and fallow deer stalking is also readily available. Only a short distance to the north is the popular sailing area of the Firth of Clyde with yachting marinas at Troon, and further up the coast at Largs and Inverkip.

Prestwick Airport is about 3 miles to the north of Ayr and has services to many European destinations. Glasgow Airport (45 miles) and Edinburgh Airport (81 miles) provide a wide range of domestic, European and international flights.

From a high bank, Cassillis towers over the River Doon. It is approached through electric gates via a private tarred drive which follows the River Doon through immaculate grounds past the Gate Lodge, Garden Cottage and Stable Block to a gravelled parking area.

Laid out over five floors, the accommodation is as shown on the accompanying floor plans. The Drawing Room bears a strong resemblance to William Burn’s work, although it is thought that it was the work of David Bryce. Vast windows flood the room with natural light, and whilst the fireplace forms a centrepiece for the room, it is undoubtedly trumped by the fine ceiling plasterwork. The Inner Hall and Dining Room also have grand fireplaces, and the glazed roof in the hall is another quest for natural light.

The spiral staircase is part of the original Keep of Cassillis, and is built clockwise to ensure an easy defence by a right-handed swordsman. Of particular note is the exquisite hollow central stone pillar. Nigel Tranter in ‘The Fortified House in Scotland’ writes: “A detail of unusual interest is the very wide newel or centrepost of the 17th century turnpike stair, which has been found to be hollow from top to bottom, with stones projecting within to form steps, and small slits admitting light from the stairway proper”. It is not known what purpose this feature served, though it was probably for lighting the staircase in an otherwise darker corner of the castle. Today electric lights have replaced traditional candles or oil lamps.

The Ballroom and adjacent Library were originally the bedroom and living quarters of the Earls of Cassillis. At almost 30′ in length and 20′ in width, the Ballroom is a superb room for entertaining, with windows overlooking the River Doon below.

The original nurseries have been converted to provide a bedroom and en suite bathroom of generous proportions, but an unusual arched passageway through the original 15th century, 16′ to 18′ thick castle wall provides a secondary access between the rooms, designed for staff. The same passageway services the East and West Chintz bedrooms on the floor above. The portcullis door marks the original Norman-style entrance to the keep. From this entrance, a secret staircase (not marked on the layout plans) leads up to the East Chintz Room.

The Bartizan bedrooms at the top of the Keep have been restored to their likely 17th century layout. The East Barizan bedroom has been restored to reflect an 18th century refurbishment with panelling and cornicing. In the West Bartizan bedroom a medieval vaulted ceiling was discovered and although in bad condition the shape of the ceiling has been left along with a hidden entrance to the secret room which was also revealed.

In all there are currently thirteen bedrooms on various floors of the castle. Seven have en suite facilities.

A well-equipped state of the art kitchen with fitted walnut cabinets and ancillary scullery and pantry has been revamped in the basement with the patterned tiled floor reflecting the original floor. A butler’s pantry on the ground floor is conveniently situated adjacent to the Dining Room. Across the passageway from the kitchen is a door to the castle courtyard, a sheltered sun-trap which is secured from the wider grounds by a gate. There are a number of stores off the courtyard.

The two adjoining rooms provide an ideal space for a gymnasium and studio. Across the passage are a well equipped laundry room and a wine cellar with vaulted ceiling.

From Glasgow and the north, follow the A77 south (signposted Kilmarnock, Prestwick Airport, Ayr and Stranraer). Continue south on the A77 past Ayr through the village of Minishant. Shortly after the village, turn left onto the B7045 (signposted Kirkmichael and Straiton). Follow this road for about ½ mile, and the gates to Cassillis will be seen on the left hand side immediately after a stone bridge. The postcode is KA19 7JN.

Railway Stations
The nearest stations are at Maybole and Ayr. For general timetable enquiries telephone 08457 484950 or visit www.thetrainline.com.