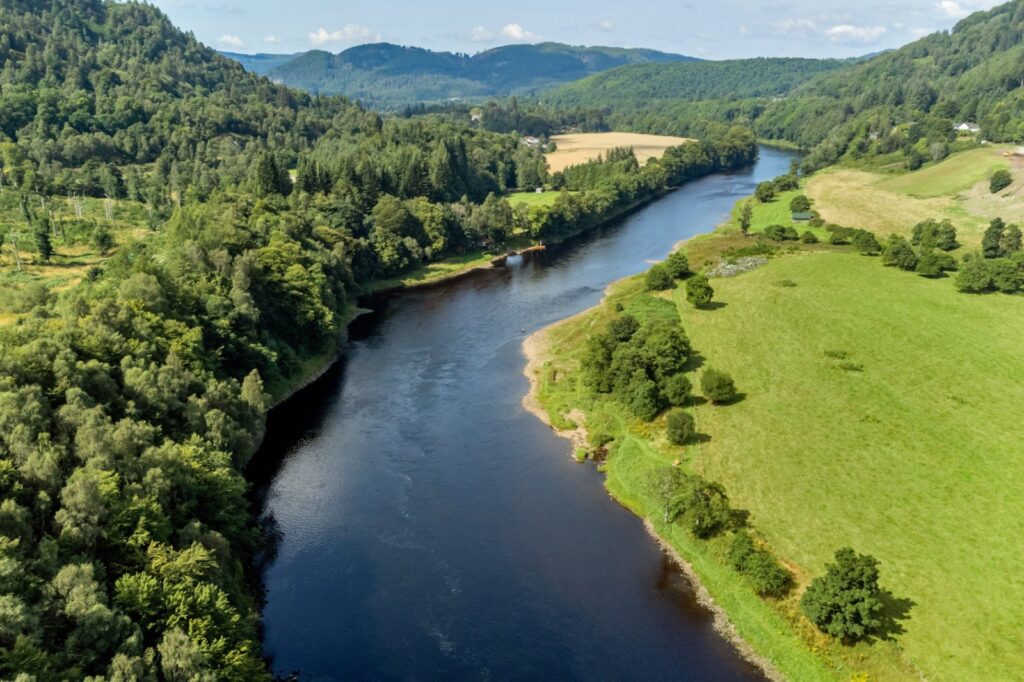 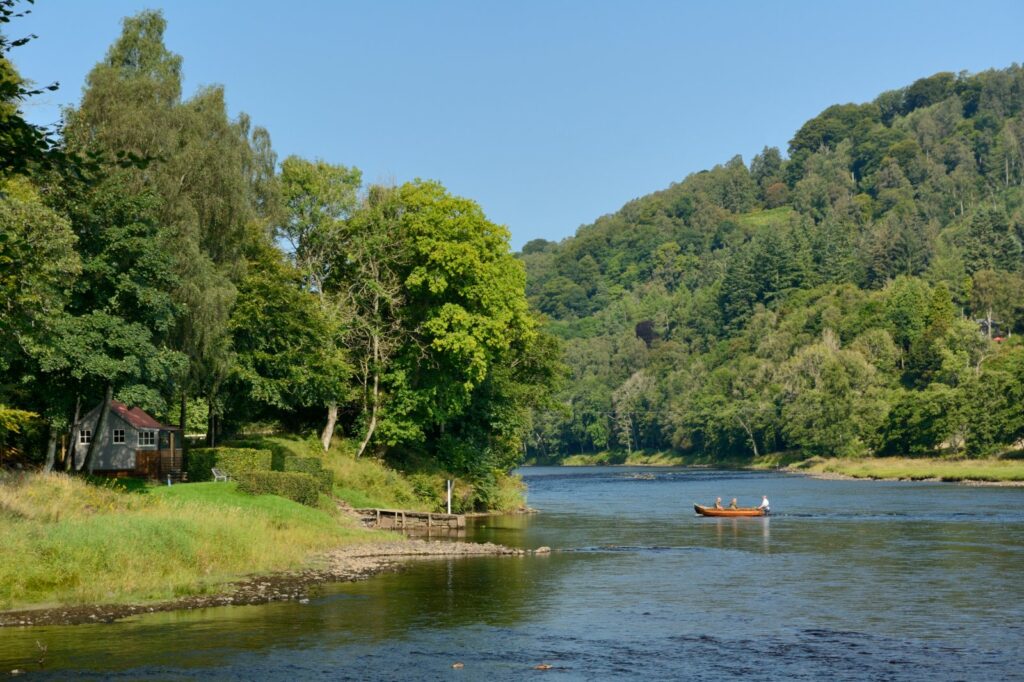 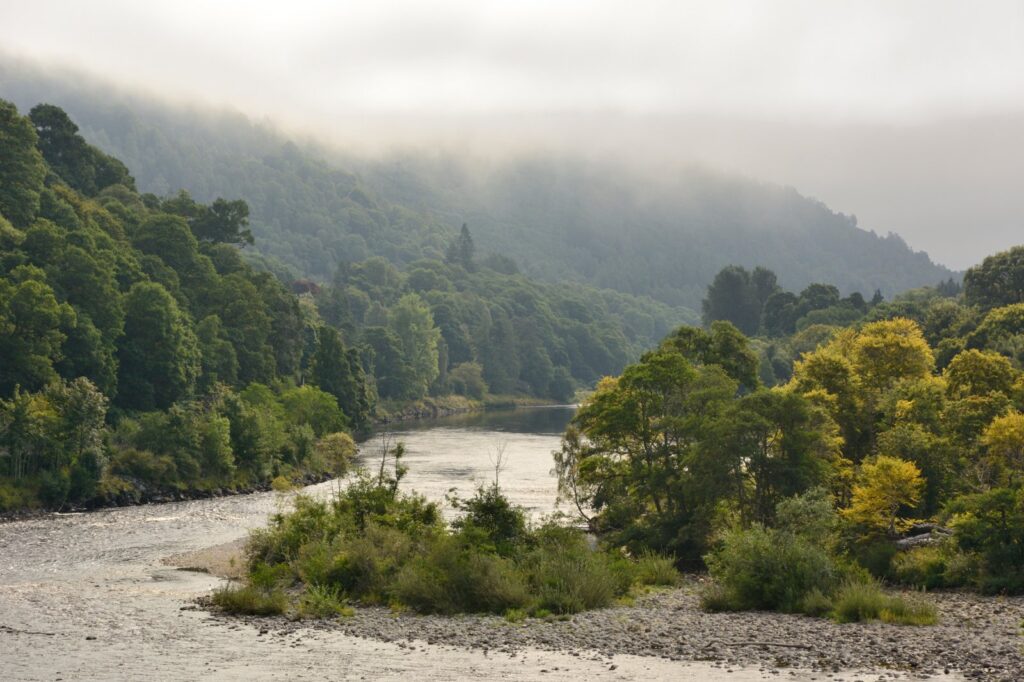 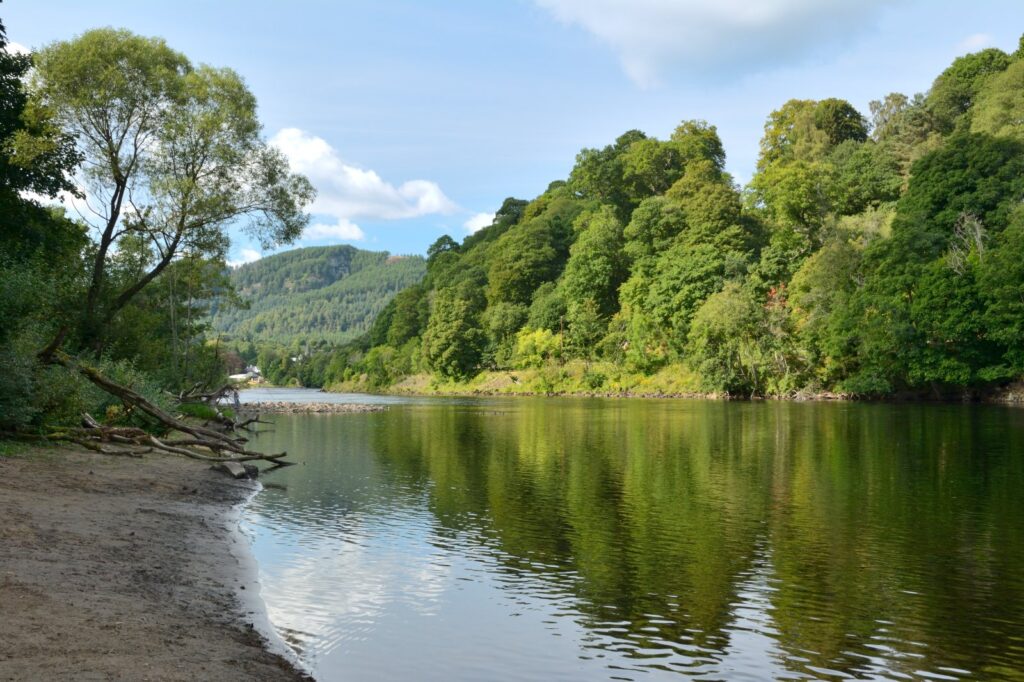 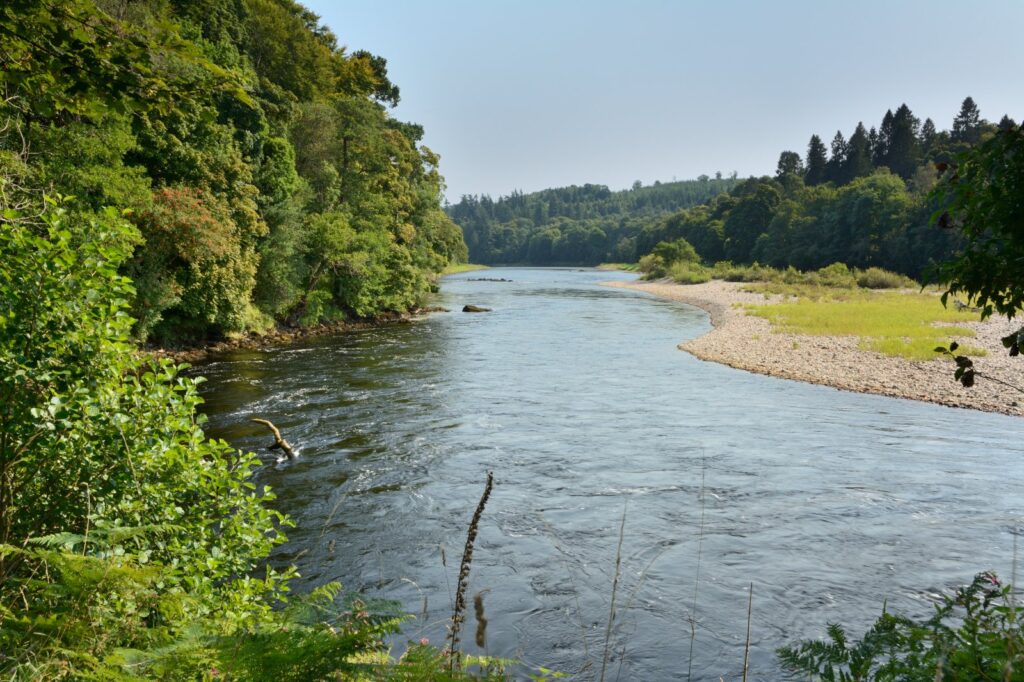 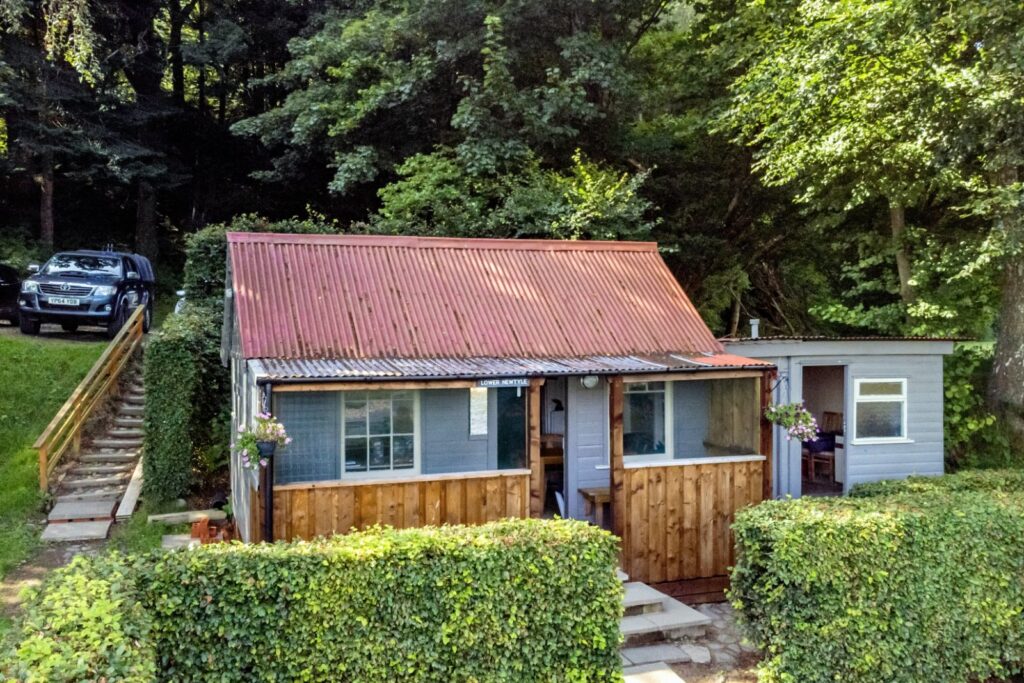 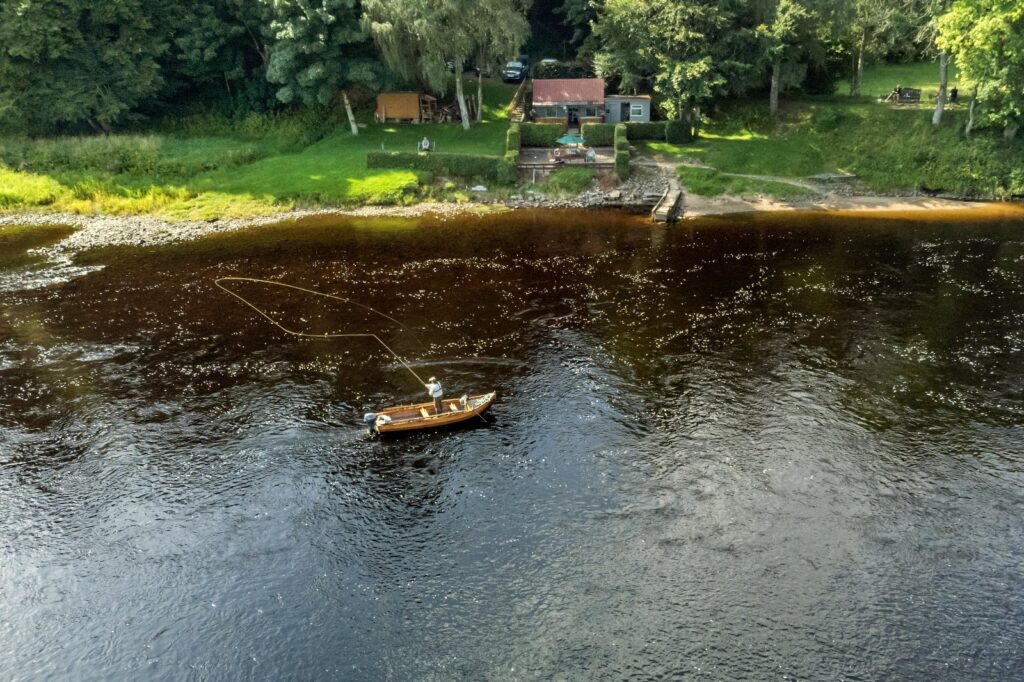 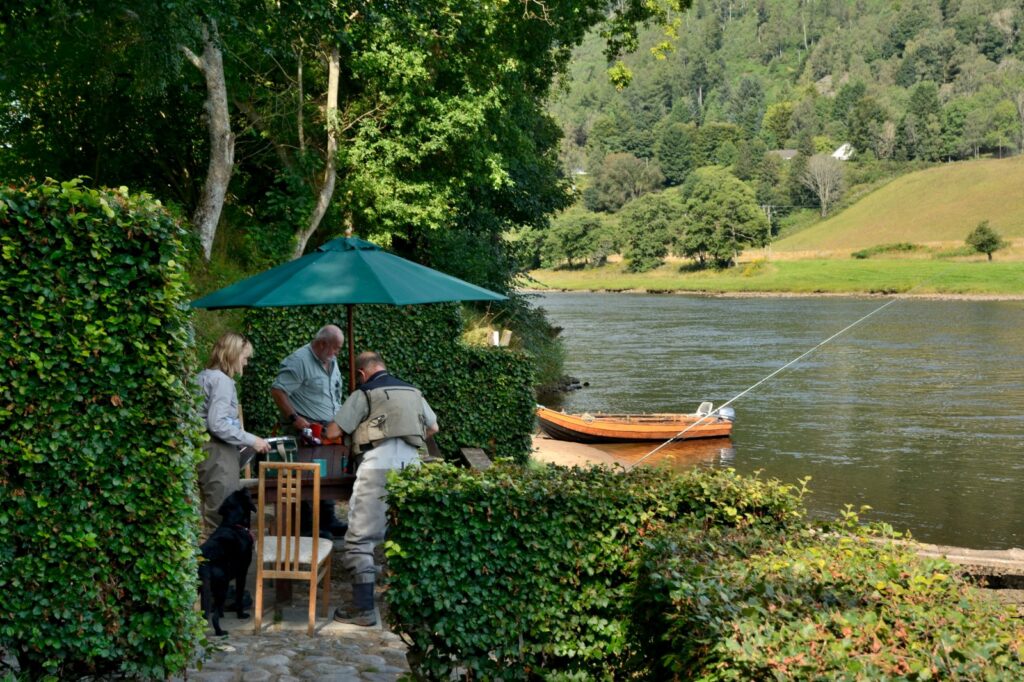 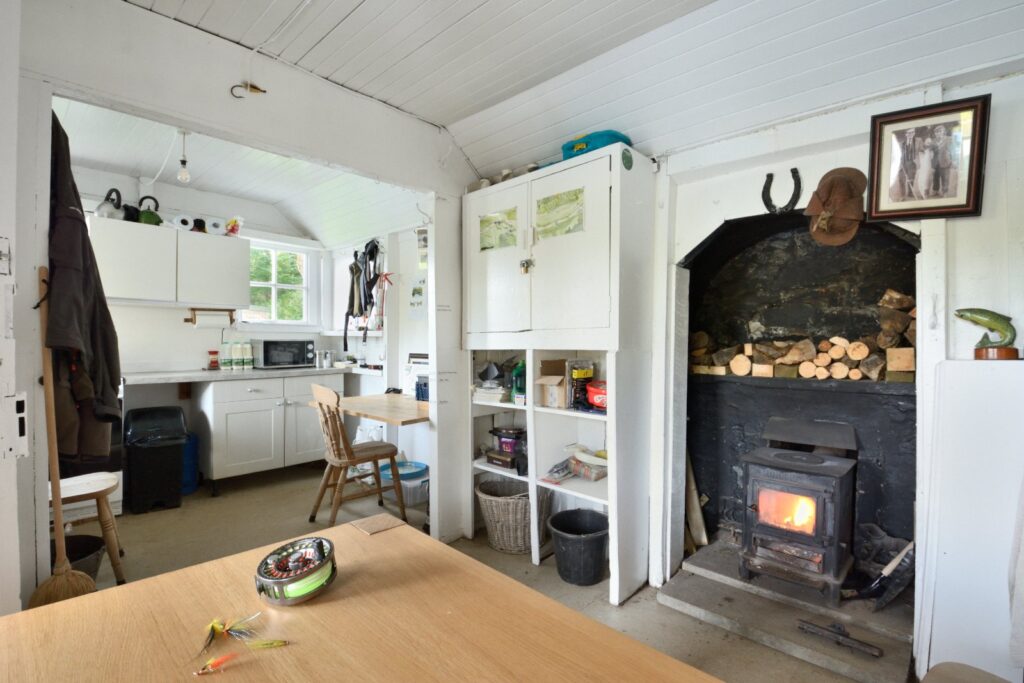 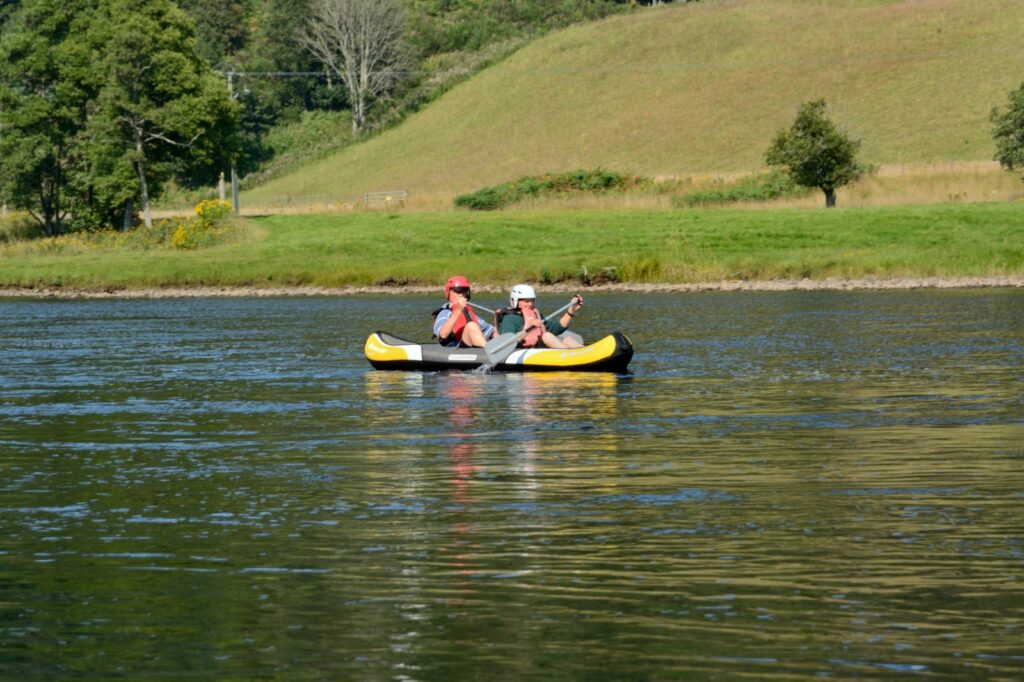 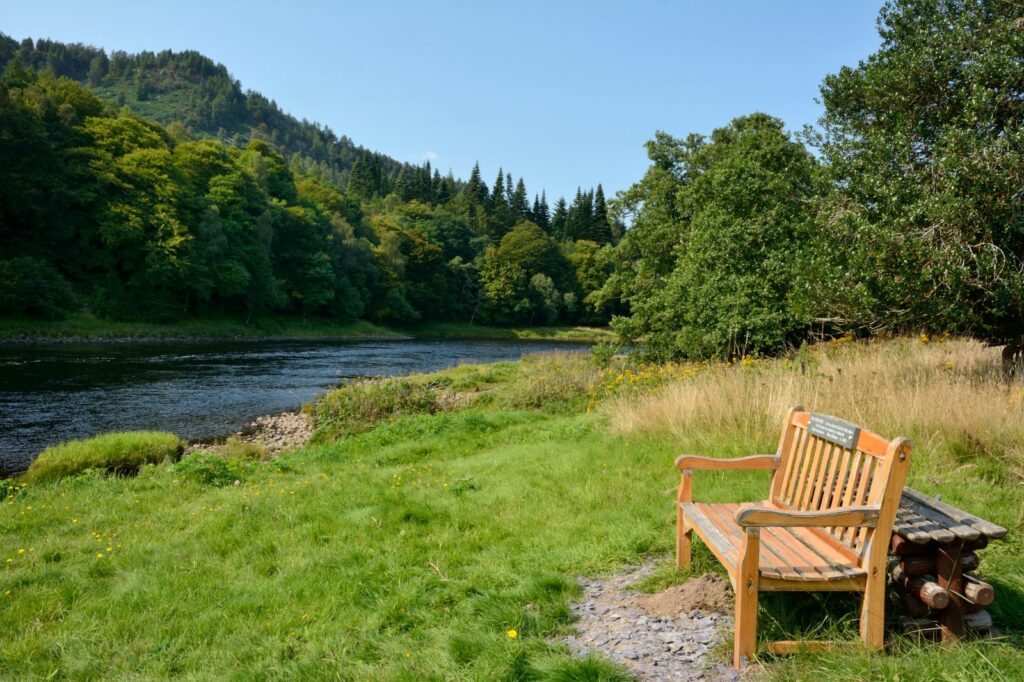 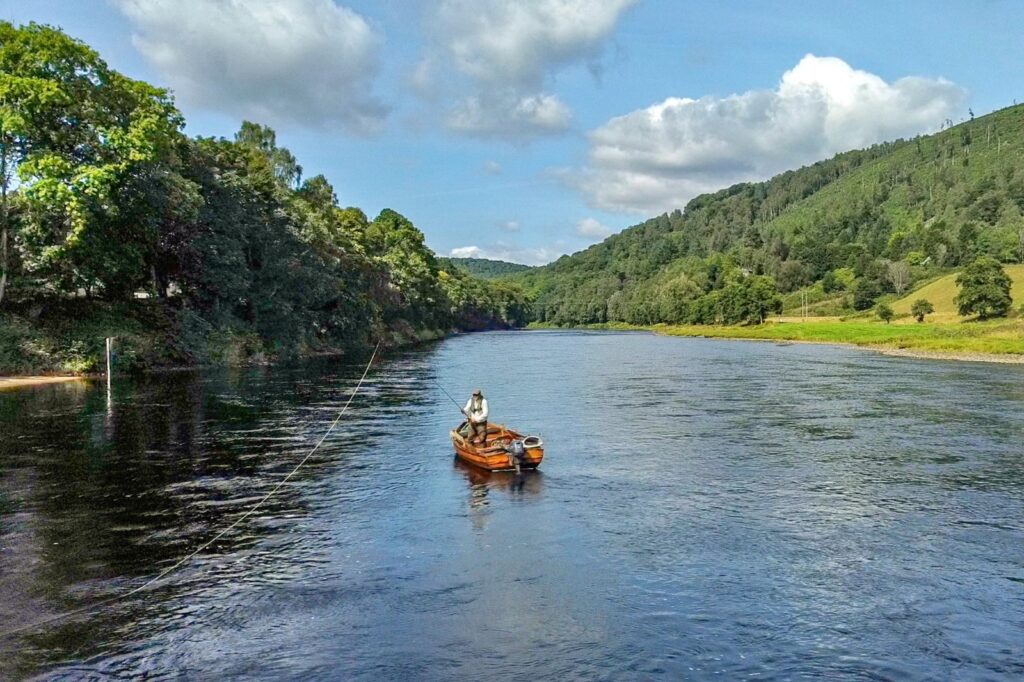 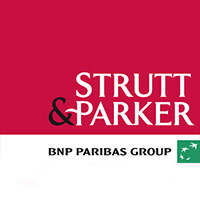 Situated a short distance downstream of the Dunkeld House Water with just the short stretch of the Dunkeld and Birnam Angling Association Water separating the two beats, the Newtyle beat of salmon fishings is also one of the most highly regarded and beautiful beats on the Middle River Tay.

A popular and accessible beat, the Newytle Water is fished by up to 8 rods across 16 named pools which provide fishing from the bank and boat. Depending on water levels and fishing at its best with 1ft 6in of water on the gauge, the beat is well suited to anglers of all persuasions and capabilities with pools of varying character offering fly fishing, spinning and harling depending on the anglers preference, time of year and state of the water.

The banks are well maintained and there is good vehicular access and a car park.

Fishing Huts
The Newtyle Water has a simple but well-appointed timber-lined fishing hut above The Boil pool that includes a fireplace, veranda, a store room and a WC and is complemented by an outdoor picnic bench/barbecue area and car park with space for several cars. This hut is situated on land forming part of the adjoining Murthly & Strathbraan Estates and is occupied and operated by the owner of the Newtyle Water on a grace and favour basis.

Situated on the opposite (left) bank with vehicular access directly from the Dunkeld to Caputh public road is a small boathouse building which is situated on land forming part of the ownership of the Newtyle Water. This site has the potential for a replacement boathouse and fishing hut/cabin subject to planning permission.

Riverbanks, Leased Fishings and Access
The subjects of sale include ownership of the riverbank and solum of the river (river bed) up to the mid-point over the north bank together with the exclusive salmon fishing rights over the entirety of the north (left) bank for over a mile of the middle River Tay together with ownership of the salmon fishing rights only for a further 0.86 mile of the south (right) bank.

There are formal rights of both pedestrian and vehicular access to the Newtyle Water including to the existing fishing hut and boat house sites.

Ghillie
A ghillie/boatman is employed on a full-time basis on the Newtyle Fishings. He lives off the property. An enthusiastic and capable angling guide as well as a fountain of knowledge on the flora and fauna of the River Tay system, the Newtyle ghillie is highly regarded by the vendors and it is their firm preference that the purchaser of this lot continues their employment under Transfer of Undertakings
(Protection of Employment) legislation.

Leisure and Amenity
The wildlife of the river and its banks includes some of the UKs rarest species of fish, bird, mammal and mollusc and there may be a commercial opportunity to be explored in presenting these attractions and encouraging access to and presentation of them to a burgeoning local tourist population. A particular feature of the location of the Newtyle beat is the presence beside the beat of the Birnam Oak  a centuries old and one of Scotlands most iconic trees thought to be one of the sole surviving remnants of the great forest which once straddled the banks of the Tay and was celebrated in Shakespeares Macbeth as the famous Birnam Wood.

Water sports in the form of kayaking, canoeing,
paddle boarding and inflatable rafting are a feature of the River Tay where responsible access to the river is granted in favour of the general public in Scotland by law.

There is a generally respectful interaction between canoeists and rafters and anglers which enables both to enjoy their chosen pastime without disturbance by the other.

Ownership of vehicular access to the existing fishing hut and boathouse may give the future owner the opportunity to capitalise on both forms of enjoyment of the river and its habitat.

Current and Future Management
Current management of the beat provides rod and line fishing for let on a daily, half weekly and weekly basis for individuals and parties of up to 8 rods. The vendor and their ghillie is responsible for managing bookings and maximising revenue.

Detailed information about the income and expenditure of the fishings business is available to seriously interested parties following a viewing.

The future management of the beat is entirely at the discretion of the purchaser. This could focus purely on offering salmon fishings for let as at present and/or could explore alternative opportunities for revenue which make use of the boats and the huts on the beat and provide alternative forms of customer experience which showcases the wider attractions of the River Tays habitat, wildlife and natural capital.

The Dunkeld House and Newtyle beats lie
within the middle course of the River Tay 
a notably attractive part of the Tay valley where
the mighty river carves its gliding course
through steeply sloping and heavily wooded
banks which are reminiscent of some of the
great rivers of British Columbia or Alaska in
appearance. Such is the renowned beauty of
the Dunkeld area, it is designated as one of
Scotlands 40 National Scenic Areas (NSAs).

The ancient town of Dunkeld lies between
the two beats on the north bank of the River.
Once the ecclesiastical capital of Scotland,
the picturesque village is steeped in Scottish
history and is the setting of the magnificent
Dunkeld Cathedral, which dates from the
14th Century and overlooks the Dunkeld
House beat.

Today, Dunkeld serves the surrounding rural
community with a range of independent shops
and services that cater for day-to-day needs
including several hotels and restaurants.
The neighbouring village of Birnam, which
is well-known by literary enthusiasts as the
favoured Scottish holiday-spot of Beatrix Potter,
has a Railway Station which provides sleeper
services to London, as well as more local
connections to Perth, Pitlochry, Inverness,
Edinburgh and Stirling.

Often referred to as the gateway to the
Highlands, Dunkeld has been a favoured tourist
destination since the railway first reached the
town in the 19th Century. Local attractions
include the Hermitage Woodland Gorge,
Birnam Arts and Beatrix Potter Exhibition
Centre, The Loch of the Lowes Visitor Centre
and Wildlife Reserve, as well as the House of
Bruar Retail Emporium and Blair Castle at Blair
Atholl. The surrounding landscape is regarded
as amongst the most picturesque in Scotland
and there is a wealth of walking, cycling and
mountaineering, equestrian and water sports
opportunities nearby.

Perth is within a 20-minute drive via the A9
Trunk Road and offers a comprehensive range
of services and facilities with high street shops
and retail parks, bars and restaurants, concert
hall and cinema, a hospital and leisure centres.

The River Tay
The River Tay is Scotlands longest river with a
catchment area of 2,000 square miles.

The river runs for some 117 miles and passes
through the dramatic countryside of Argyll and
west Perthshire and, after Loch Tay, is joined
by many tributaries on its course downstream
including the Lyon, the Tummel, the Isla and
the Almond.

The river passes through a variety of Highland
scenery and rich rolling farmland to the
ancient city of Perth and the North Sea via
the Firth of Tay.

At Strutt & Parker we’ve been at the forefront of the estates and farms market for over 125 years, handling all types of sales from commercial dairy farms to best in class, trophy estates.

Our clients choose us because we have a proven track record. They trust us with the sale of the...