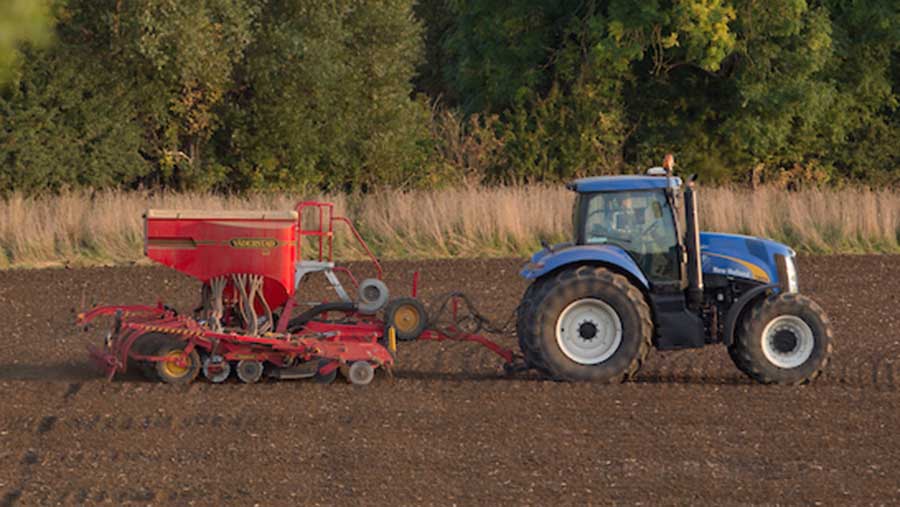 Late-October drilling is a key part of managing blackgrass, allowing several rounds of stale seed-beds, however, yields can range from a healthy 12.8 t/ha down to a little as 4.6 t/ha, underlining the cost of getting it wrong.

This is the message from 17 years of blackgrass trials carried out by Agrii at its Stow Longa Blackgrass Technology Centre in Essex.

“There’s a month less time and about 400 less day degrees [cumulative temperature] to achieve the strong establishment we need ahead of the winter.”

“At the same time, we know conditions can rapidly turn against us at this time of year,” adds Bedfordshire farmer and Agrii regional technical adviser, David Felce.

“Especially on heavy ground and with the sort of weather variability we’re seeing these days.”

To help growers, Agrii specialists offer their 10 tips to get double-digit yields rather than a 4.6t/ha crop.

1. Stay off the land

Soil is the first consideration and it must be in a fit condition to drill.

“Your soil must be able to take water and allow you to create a decent seed-bed,” says Steve Corbett, trials officer at the Stow Longa trials site

“Stay off the land until you can drill to an even depth without clods or you’ll have big problems with pre-emergence [herbicide] activity and slug control, not to mention the seed-to-soil contact essential for the best early crop growth.

“And if you can’t get the right conditions, stay off until the spring. Whatever you do, don’t maul the crop in. With margins as tight they are today, it simply isn’t worth it,” he warns.

2. Move as little soil as possible when drilling

Wherever soils are fit after mid-October, Mr Corbett advises drilling without delay and with minimal soil movement, so the least amount of blackgrass is woken up.

“You need to drill at a consistent 3-4 cm so the seed is deep enough to be out of the way of residual chemistry, but shallow enough to get out of the ground as rapidly as possible.

“Where possible, place phosphate with the seed or apply it early to encourage rooting.”

He explains that sufficient phosphate is vital for early root development and its availability is reduced in cold, wet soils.

“So it’s well worth using a specialist availability-enhancing coating with your fertiliser.

“Averaged across fertiliser rates, adding a P-Reserve coating to tri-sodium phosphate increased feed wheat yields by 0.64t/ha from early November-drilling in our trial work for a cost of just £8/ha,” says Mr Corbett.

What you drill is every bit as important with late-sown wheat as how you do drill it, believes the company’s head of agronomy, Colin Lloyd.

As well as fast development, he advocates varieties with the greatest weed competitiveness and high-quality seed for the best germination and early vigour.

“The latest Agrii Advisory List produced from our own national trial work, as a complement to the Recommended List, shows that the quality wheats – Skyfall, Trinity and Cordiale – are particularly well suited to late drilling,” he says.

“Among feed wheats, Evolution and Dickens stand out. With the exception of Cordiale, all these varieties have proved relatively competitive against blackgrass in our Stow Longa testing.”

He adds that they can all safely be sown to the end of January.

“But if you want even more flexibility, we’ve found that a spring wheat such as Mulika can perform as well as many winter varieties from late sowing.

4. Use a seed treatment

Sow at 400-450 seeds/sq m, depending on conditions, to achieve spring populations of about 320 plants/sq m.

Regardless of variety, Mr Lloyd explains that reduced tillering potential from later drilling means higher plant populations are needed to produce the target of at least 400 ears/sq m.

This requires a spring population of 320/sq m, compared with 260-280/sq m from earlier drilling.

“It’s vital to spray-off blackgrass and other weeds with glyphosate as close to drilling as you can,” says Mr Lloyd.

However, if growers have to leave a week or more between spraying-off and drilling, it’s best to include a permitted glyphosate with the pre-emergence to deal with already emerged, but often hard-to-spot, weed seedlings.

“While late-October sowing gives much better flufenacet residuality, the herbicide must go on as a pre-emergence because you may not have much in the way of peri- or post-emergence spraying opportunities.”

Mr Lloyd adds that its worth adding a specialist adjuvant to improve activity and crop safety.

8. Look out for slugs and other pests

“Earliest is best with slug control,” he says.

“Assess the pressure and always kill before you drill. Giving slugs the choice of pellets or nothing is far more effective than pelleting alongside juicy, young wheat seedlings.”

Without the seed treatment, though, he stresses that it may be needed but prove impossible due to the weather, underlining the importance of building in barley yellow dwarf virus protection from the start.

“As well as getting late-drilled wheats off to the best possible start, you’ve got to keep them going strongly as they come through the winter,” says Mr Felce.

“Unlike traditional wheats after roots, they’re unlikely to have plenty of available nutrition in the soil and, in many cases, they have to cope with the extra nutrient drain of incorporated straw.”

That’s because high carbon straw locks up nitrogen when it breaks down.

“So, just like second wheats, a good early dose of nitrogen will be important to maximise tiller retention.

“By which I mean 60-80 kg/ha of nitrogen in mid-February if conditions permit, ideally accompanied by fresh phosphate, some potash to support shoot development and sulphur to balance the nitrogen.

“Then you should come back with the nitrogen regularly to keep the crops going, so you don’t leave a ‘hungry gap’.”

Early spring rolling to deal with any frost lift can pay dividends, too.

This will help tiller retention, promote rooting and counteract the tendency for thick crops with thinner shoots to be more prone to lodging.