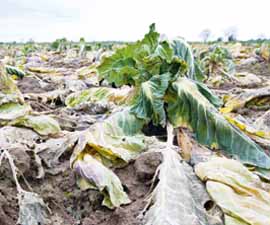 Farmers across the country have been left counting the cost of lost crops, collapsed livestock buildings and burst pipes.

Rural insurers said 2010 would go down in history as the worst year on record for cold weather claims.

Among the worst-hit are England’s 4000 sugar beet growers. Temperatures plunging to -13C in December followed by a mild and wet January left £52m of sugar beet rotting in the fields, according to Farmers Weekly calculations based on British Sugar figures.

UK sugar production would be 300,000t down on last season – equivalent to some 1.95m tonnes of unprocessable beet that must be ploughed in, suggests a trading statement issued by the processing giant this week.

British Sugar itself will take a £20m hit. Unlike farmers, contractors and hauliers, however, the company will offset some losses by supplementing UK production with third party sources of sugar and draw-downs from stock.

Fieldscale vegetable growers are also suffering. Up to 80% of the cauliflower crop is damaged, with growers facing £7m losses. Savoy cabbages and brussels sprouts will see £5m losses, according to the Brassicas Grower’s Association.

“This is the third year of cold winters so growers are starting to assess their options,” said BGA chairman Phillip Effingham.

Other losses, estimated at £3m, and the knock-on effects on following crops, take the total cost to at least £101.36m.

A Lincolnshire grower, who asked not to be named, said he had lost up to 75% of his cauliflower crop. Prices had risen by 15% but were nowhere near enough to losses, he said. “I have lost about £600,000 in growing costs alone.”

“Coupled with the very cold spell in January 2010, December’s icy blast has made 2010 the worst year in our 100-year history for cold weather claims,” said John Kenny, the company’s chief claims manager.

“After a long run of mild winters, 2010 has been a reminder that ice and snow can wreak tremendous damage.

“There are lessons to be learned- particularly about the construction of farm building roofs and the siting and insulation of water pipes.”