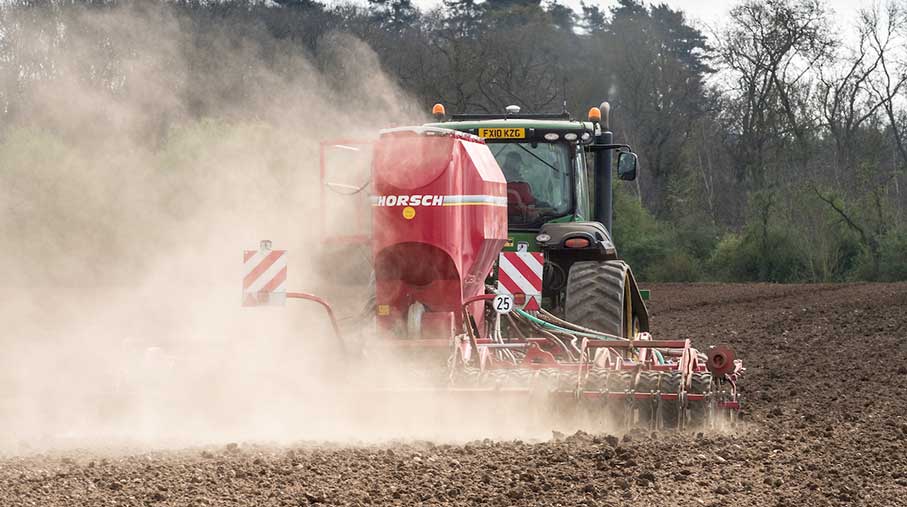 Dry conditions are the dominant topic of conversation among arable farmers, with low rainfall a particular concern on freshly drilled vulnerable spring crops.

By the middle of April, according to Met Office data, the UK as a whole had received just 26% of its average rainfall, with the south of England the worst affected. Middlesex had the lowest amount at just 1mm.

With this following on from the driest October-March period since 1995/96, there aren’t many growers out there who wouldn’t be thankful for a wet day, but, while it remains a concern, the majority of crops are coping – at the moment.

See also: How to get wheat fungicide timings right in an early spring

Here are 12 tweets from around the country summing up conditions on the ground:

1. For Cambridgeshire farmer Daniel White, it’s not just yields that could be under threat, but also his topsoil:

Fen blow. Wind #erosion. Need the rain to make it grow and get some cover. Big coat on today too #Brrrrrr pic.twitter.com/5hZ2u9shWu

2. While the South East has borne the brunt of the dry conditions, things are also getting parched further north and west, with Midlands agronomy company Indigro taking this snap of some seeds that haven’t yet got going:

Land worked this spring remains extremely dry. This spring wheat is coming up for 3 weeks since drilling #drought pic.twitter.com/Oxh2wNYtcn

3. Other plants have come through well, but there hasn’t been enough moisture to soak the fertiliser in. This will be a concern to malting barley growers, in particular, if plants race through their growth stages and get a big hit of nitrogen later on, with the risk of high grain nitrogen:

Story of the day, barley established well but with minimal moisture fertiliser stacking up on the surface #drought pic.twitter.com/aQX2hUfZXK

4. It’s not just grain crops that are getting thirsty, spring-planted pulses pushing through would also benefit from a bit of the wet stuff:

5. However, there are a number of crops growers benefitting from a more consolidated seed-bed:

6. Old variety, new technology. This wheat crop was established directly into a cover crop on the light land of the Lincolnshire wolds:

Mulika DD into @kings cover crop on the Lincs Wolds in need of a drink but otherwise looking well. @meehal121 @AliceJCannon pic.twitter.com/6uMVLBMzuN

7. This crop of oats has also had more moisture to tap into than on land that has been turned over in the spring:

Oats on the horizon..could this just be the year to conserve moisture by drilling directly into cover crop!!! pic.twitter.com/8QtSBQdFAT

8. Spring oilseed rape is often regarded as one of the crops most vulnerable to a dry spell in the spring. However, this crop was still pushing through two days ago in the South West:

Spring oilseed rape starting to come through despite the lack of rain @AgriiWest pic.twitter.com/fn0e8FwoFQ

9. This crop in Kent may look nice and green, but the ridge behind it looks more like the colour you’d expect it to be in the middle of summer, after less than an inch of rain in eight weeks:

10. There’s still some moisture left in Devon for former AHDB monitor farmer James Lee who has been out with the plough this week ahead of drilling:

We have hit some moisture! 6 14 inch breasts flicking it over. pic.twitter.com/wqezgzhZSj

11. There’s even a bit of damp in the air in Sussex, but the blue skies give a hint to how it’s lacking in substance:

It's just tried to rain!! A wet windscreen is welcome but I won't get carried away by putting the wipers on! #pleasemorerain #crops #weather pic.twitter.com/ir0tsxpXvV

12. And if anyone out there was worried about their crop of blackgrass, there’s no need to lose any sleep yet over the notoriously hardy weed, says arable farmer and Anglian Water catchment adviser Tom Edmondson:

Found some blackgrass going to head in a crop of Crusoe today. Doesn't seem to be struggling for moisture. pic.twitter.com/kK9xGf6mMQ