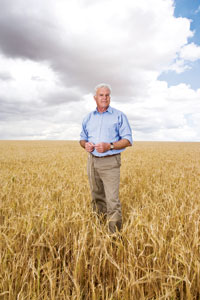 Sugar beet has gone from being simply a break crop at Bartlow Estate to being the most profitable crop, with yields exceeding 100t/ha in some fields.

John Goodchild’s extensive technical knowledge of growing sugar beet has been the driving force behind its success. It doesn’t stop there, he is also successfully growing premium crops, such as milling wheat and wheat for seed.

He recalls the early years when he was managing 100ha of beet. “We had a two-row harvester and it seemed to take forever to lift the crop.”

He saw a six-row harvester on another farm and quickly realised that this was the way forward. So the estate invested in a six-row ROPA and the area has more than tripled to 364ha.

Alongside this, he has established a contract harvesting operation allowing the full use of the harvester. John and his team are lifting more than 2000ha for 20 growers, making use of a second harvester owned by a local grower, growing 160ha of his own.

John has integrated the lifting operation with the estate’s haulage business, which has two lorries plus drivers, delivering beet to the factory. “This enables storage on farm to be minimised, in turn reducing in-clamp losses.”

John believes this quick turnaround has helped increase yields. Last year, crops averaged 78.5t/ha with some fields exceeding the magical 100t/ha barrier. “You don’t know what is lost in storage,” he says.

Crops receive two fungicides to help retain leaves as he believes it helps keeps frost off in December.

The cereal side also benefits from the haulage enterprise, with the two lorries deployed during harvest bringing grain back from outlying fields, the furthest being 40 miles away. “It is a very useful and integral part of the system.”

He believes in keeping the rotation simple, with feed wheat followed by milling wheat, then oilseed rape on heavy land. Sugar beet is grown on the lighter land followed by spring barley (for late-lifted beet) or wheat then wheat.

The biggest challenge has been blackgrass control and he has adopted three approaches – chemical, rotation and cultivation. “It costs £8/acre to plough and while it sounds a lot, you wouldn’t think twice spending this amount on a herbicide.”

Half of the farm is ploughed each year, before and after sugar beet and spring crops, and it also helps soil structure in a wet year and insures against weather turning before drilling is completed. On heavy land, rape is either Claydon direct drilled or drilled with a Vaderstad after minimal tillage.

However, much of this gain can be lost with poor marketing. To minimise risk, he sells in 1000t batches. Risk is also spread by selling one-third through pools, another proportion forward and the rest on spot price.

Value is added where possible with 405ha of milling wheat under contract to Warburtons. Another premium crop is 25ha of wheat for seed production.

“A key part is our good team of roguers taking out weeds. They also walk sugar beet for weed beet, which helps us retain our one-in-three-year rotation,” he says.

Segregating cereals is easy in the estate’s unique 8000 tonne grain store installed in the mid-1990s which has 79 bins, including 64 which came from an old malting in Ware.

John is a firm believer in agri-environment schemes, with the whole area in ELS. A Claas Maxi Swather is used to cut headlands and minimise the risk of Round-up (glyphosate) drifting onto surrounding nature strips.

He also educates the public about the natural environment by taking local people on night visits to show wildlife.

With a diverse arable business, good staff management is key. He doesn’t believe in micro-managing staff, instead he gives directions and lets them take responsibility for the jobs as individuals and as a team.

The wider sector is now benefitting from John’s sugar beet knowledge, having just joined the NFU sugar board, and he is also involved in his local NFU region.