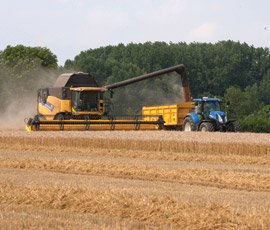 Two extreme growing seasons have left their mark on many of the new winter wheat varieties on the HGCA Recommended List (RL) for 2013-14.

That’s the view of experts, who note that half of the 10 newcomers performed badly in 2012, putting them lower down the pack than their previous results suggested.

“It’s something that growers should take into account,” says independent agronomist Peter Riley of Prime Agriculture. “There were some big losers this year. That could be turned on its head again if we experience a different growing season in 2013.”

Clare Leaman, cereals specialist with NIAB TAG, agrees. “In 12 months, we could be looking at some very different results. It shows the importance of not basing decisions on just one year.”

Bill Handley of the RL team acknowledges 2012 was a very poor year for yield and quality, with lodging also taking its toll, but points out there was a 0.4t/ha yield difference between the control varieties and the new recommendations.

The new races of yellow and brown rust, which first appeared in 2011, claimed their first victims, with both Torch and Stigg being removed from the Recommended List for falling below the agreed minimum standards.

“We are now testing all the candidate varieties in the UK Cereal Pathogen Virulence Survey, so we will have more information on their susceptibility to disease before we have to make a decision about their recommendation,” he says.

“So the new additions have performed well in two rough years. And we’ve seen progress with disease resistance and grain quality.”

Among the varieties which did not lose ground in 2012 is the new Group 2 choice Chilton, from DSV, which brings an improved Hagberg and specific weight over most others in that category, and is high yielding at 100%, he notes.

“It’s been very consistent over four years. And it has been provisionally approved for the ukp export brand. “

Dr Steve Hoad of SRUC is keeping a close eye on Chilton. “Its yield in the North was 104%, so that makes it of potential interest to us. Only time will tell.”

Both Mrs Leaman and Mr Riley point out that it takes time for new milling varieties to become accepted.

“The market has to decide, but previous success has been based on a variety having a good Hagberg, specific weight and protein content,” notes Mr Riley.

Year-on-year consistency is also a feature of the new soft Group 3s Monterey and Delphi, both of which are from Senova and have four years of trials data behind them. In the Group 4s, soft type Leeds and hard feed Dickens also show this characteristic.

Monterey and Delphi, bred by Blackman Agriculture Ltd, have yields of 102%, so come just behind the other new Group 3, KWS Croft, which at 104% sets a new yield standard for Group 3.

Monterey is suitable for the biscuit and export markets, but not distilling. It has a good disease package and a high specific weight – something that Mr Riley believes will be of interest to growers after 2012.

Delphi, which was recommended for the East, is short and stiff with good disease resistance, especially for yellow rust. “It looks to be a slow developing type, which could make it suitable for early drilling,” comments Mr Riley.

Delphi is the only one of the new Group 3s to be acceptable for distilling, points out Mr Handley, who adds that it has shown very good yield performance in the East.

KWS Croft, which tops the Group 3 sector for yield, offers a 3% improvement over Invicta. With resistance to orange wheat blossom midge and very good yellow rust resistance, it meets the requirements of the biscuit and export markets.

Seed availability is rumoured to be good, with enough for a 2-3% market share. But Mrs Leaman and Mr Handley sound a note of caution about straw strength.

“It gets a 5 for lodging without PGR and a 6 with PGR. So it may not be the best choice for fertile sites,” he warns.

Mr Riley notes that KWS Croft is one variety that had its yield depressed by the 2012 season.

“It could be more of a step forward in yield than the figures suggest. Straw strength is a key consideration for most growers, so the right PGR programme will be essential.”

Three of the four new soft Group 4s were similarly affected by the conditions in 2012, he continues. “Myriad, Revelation and Cougar were all looking to be very high yielding – especially Cougar – until the final harvest results were in.”

In contrast, Leeds, from KWS, which is now the highest yielding soft Group 4 at 106%, had a good year. “It’s not far behind the hard feed varieties in terms of yield and there could be more to come,” says Mrs Leaman.

Dr Hoad picks out Leeds as the best of the four for Scotland. “It’s got the yield, the stiff straw and the distilling potential, with good alcohol yields. Its only downside is mildew.”

Both DSV and Blackman Agriculture are new breeder names on the HGCA Recommended List for winter wheat.

Better known for its oilseed rape breeding, DSV is hoping to introduce a number of wheat varieties over the next two to three years.

Chilton is the first variety to come from this work, says programme head Matt Kerton of DSV. “We also have a biscuit wheat, four milling types and a feed wheat in NL trials, so there’s a good pipeline.”

John Blackman, who heads up Blackman Agriculture Ltd, has already had RL success with the spring wheat, Mulika, but Monterey and Delphi are the first two winter wheats to come from his specialist breeding venture. Havana, a hard Group 4 winter wheat, was also up for recommendation.

Likewise, Limagrain’s Myriad, with a yield of 105%, meets the requirements of the northern grower, he adds. “Again, it has yield, distilling potential and a good specific weight. It looks good.”

Revelation, also from Limagrain and with a yield of 104%, is interesting, remarks Mr Riley. “It has the Pch1 eyespot resistance which could make it valuable for early sowing. Added to that, it has very good standing ability and a really decent disease resistance package.”

Mrs Leaman sees it as an ideal companion variety, but Dr Hoad is disappointed with Revelation. “It’s so nearly there. It has everything we want, but its very late maturity is just too scary for Scotland.”

Cougar, from RAGT, was one of the biggest losers of 2012, but still joins the list with a yield of 104%. “It has a really decent disease package and you have to be impressed by its septoria resistance, which is a 7,” says Mr Riley. “It also has very stiff straw and orange wheat blossom midge resistance.”

Mrs Leaman points to Cougar’s high untreated yield. “It is good to see this type of variety coming on to the list. It’s a bit later than some will like, but it’s a variety which probably has more yield potential than we’ve seen this year.”

Both with yields of 106%, they are very different types, note commentators.

Dickens, from Agrii, is the only new variety with reasonably early ripening, which will help growers keep a spread of maturity, says Mr Riley.

KWS Kielder was 11% down on its 2011 performance this year, he adds. “It could be very high yielding. Advantages over Santiago are its eyespot resistance and its better straw strength, but there are downsides in its specific weight and lateness to harvest.”

Like Mr Riley, Mrs Leaman is slightly wary of Kielder’s yellow rust rating of 4. “I’d be happier with a higher score and we need to know if it will remain at this level.”

Dickens has good grain quality, she notes. “It was in a large pack of very similar candidate varieties but it came out of 2012 very well.”

However, neither has a place in Scotland, predicts Dr Hoad. “Kielder is a bit too late and Dickens doesn’t have the straw strength that we need up here.”