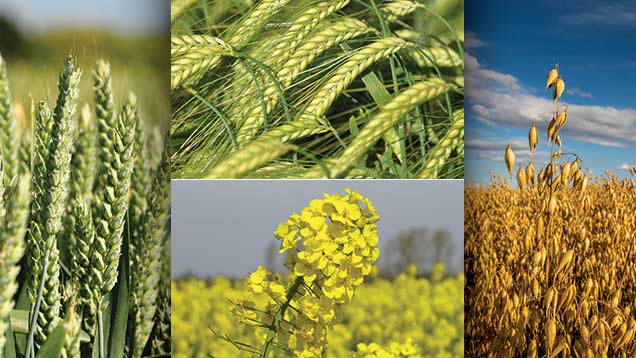 Twenty-eight new cereal and oilseed rape varieties were added this month to the new HGCA Recommended Lists for 2015/2016. Which ones are set to attract most interest from growers?

Two high-yielding milling wheats and a barn-filling feed wheat taking yields to a new height were the three varieties tipped for success by the seed trade.

These three were selected from the six new entrants to the winter wheat HGCA Recommended List with Trinity and Lili showing promising quality and Reflection a high feed wheat yield.

Trinity, which is a Group 1 breadmaking wheat from breeder KWS, shows a yield similar to last year’s newcomer Skyfall and the most widely grown wheat overall Diego at 102%.

The variety could become a mainstay for the millers with good breadmaking qualities, the highest Hagberg of 337 on the list and good all-round disease resistance.

Lee Bennett, national seeds manager at farming co-operative Openfield, says the variety looks good although its protein content at 11.4% is lower than Skyfall’s 11.8% and Crusoe’s 12.4%

“The variety looks interesting and is very clean of disease in the field with a very good Hagberg specification,” he says.

All wheats grown in the HGCA trials are grown as feed wheats, so breadmaking wheat growers may see higher proteins when following a milling wheat growing regime which uses late nitrogen fertiliser application.

He points out that Trinity has a lower disease resistance score of 5 against wheat’s most yield-sapping disease Septoria tritici, while fellow breadmakers Skyfall and Crusoe each have a 6.

“Much of the success of Crusoe and Skyfall was due to their good septoria resistance so Trinity may have a harder time competing,” he says.

Mr Barker adds Group 2 milling variety Lili, also from KWS, yields as high as leading feed wheats such as Santiago at 105%, and may have the possibility of a milling premium while its septoria resistance appears higher than the stated 6.

He believes the variety could have a greater appeal than Trinity and predicts that Lili could take about 5% of the winter wheat area next autumn.

Mr Bennett is also upbeat about Lili as the variety will give a good yield if grown for feed and still have the chance of a milling premium. He points out the variety was initially given a 7 score for septoria resistance.

“It looks like a good first wheat with barn-filling yield and the advantage that the millers might be interested in paying a premium,” Mr Bennett says.

The variety does show a leap forward in yield within Group 2 varieties some 4% ahead of the next variety and well above old favourite and mainstay of the group Cordiale at 97%.

Over in the feed wheats, the hard-milling Reflection from Syngenta caught the eye with a yield of 107%, just above the previous top yielders Evolution and Kielder at 106%.

Agrii’s Mr Barker says the variety has good appeal with a high yield, early maturity, good grain, stiff straw and decent septoria resistance, with a yellow rust resistance score of 7 being the only area of concern.

He adds the variety could take 5% of winter wheat sowings this autumn with enough seed for 7-8%, and could be the number-two variety after Diego in the hard-milling feed wheat category, which takes up nearly half the overall wheat market.

Mr Bennett says Reflection did well in the difficult wet harvest of 2012 and looks interesting, although he agrees with Mr Barker that there may be a worry over managing yellow rust.

The variety is earlier maturing than other top yielding feed winter wheats such as Evolution, Kielder and Santiago and in line with Diego and Dickens. This may be a key advantage for growers in the north of  England and into Scotland.

There are two new entrants from French breeders coming into the Group 3 biscuitmaking category, with Britannia at 104% outyielding the next best in the group by 2%, while Conversion yields 101%.

Seed experts say this category is shrinking as biscuit-makers use more of other types of wheat, and specialist varieties now only make up 7% of all wheat sown. The sector is still dominated by older varieties Scout and Claire.

Britannia from Limagrain looks a useful variety, but many experts say its success will depend on the category.

Conversion from RAGT yields below Britannia at 101%, but it has good distilling characteristics in line with the best wheat varieties on the list.

It could be a potential replacement for Viscount, which is the biggest winter wheat variety in Scotland and grown with the distilling market in mind.

Costello from Senova is another entry to the hard-milling feed wheat category alongside Reflection with the highest overall specific weight on the new list and good disease resistance.

The variety yields 104%, 2% ahead of Diego, although there is unlikely to be any commercial seed available in autumn 2015.

Two new winter barleys were added to the HGCA list this year, with Infinity pushing yields ahead of old favourite Glacier, while the six-row Daxor edges closer to the hybrids.

Infinity from breeder KWS shows a yield of 105%, just ahead of the breeder’s stablemates Glacier and Tower at 104% with good specific weight and stiff straw.

Seed experts describe the variety as being a useful addition to the line of varieties from the barley breeder, but it will not be a big game-changer like Glacier.

The variety has a slightly higher resistance score of 6 to the wet weather disease rhynchosporium compared with 5s for Glacier and Tower so may appeal to growers in the wetter west.

Infinity has a lowly 3 rating for mildew resistance, similar to Glacier but below Tower’s 5.

Six-row variety Daxor from the same breeder scores a yield of 105% just behind the hybrid Volume at 107%, but with a lower specific weight may only have appeal in six-row winter barley regions such as Scotland.

The specific weight at 66kg/hl is nearly three points below Volume at 68.7kg/hl, and the variety may struggle to break into a six-row winter barley market dominated by hybrid varieties.

Six new malting spring barleys were added to the HGCA list for maltsters to assess their potential along with one single-purpose feed variety.

The success of these six varieties will depend on the views of the maltsters to see which of them might become as popular as varieties such as Propino and Concerto.

This process can take some time and many seed experts are reluctant to tip strongly any of these six without further feedback.

“So much depends of what the end users see in these varieties for them to become a success,” says Agrii’s Barry Barker.

He picks out two of the six spring malting varieties for particular mention for their potential, namely Planet and Olympus.

Two new spring oat varieties were added to the HGCA list with yields well above current favourites, although like spring barleys much depends on the views of the end users.

Aspen and Montrose are both available from breeder Senova and become the two highest yielding varieties on the list.

Specialist brewing variety Planet from RAGT comes in as the highest spring barley yielder at 109%, topping malting variety Irina and feed type Shada both at 108%.

The stiff-strawed variety has similar maturity to other popular brewing varieties and may take some share from the likes of Propino (102%) and Tipple (97%).

Mr Barker says the variety has seen good demand from continental Europe, but has not the best disease profile with scores of 5s for brown rust and rhynchosporium.

His second variety Olympus from Limagrain shows a yield of 105% and has potential for grain distilling use in Scotland, and so may rival older variety Belgravia.

He adds that the variety may eventually be a replacement for Belgravia (96%) with a higher yield and a slightly better disease resistance profile.

Three other new varieties – Sienna, Octavia and Vault – show potential as dual-purpose malting barleys for use in brewing and distilling with the first two from Limagrain and the latter from Syngenta.

These three all yield 104%, behind leading specialist brewing and feed types, but ahead of older dual-purpose types Odyssey at 102% and Concerto at 97%.

These three are currently in commercial testing and potentially could give growers greater flexibility in their end use.

One other variety from Limagrain, Deveron (105%), is under test for its possible use in malt distilling.

Only one new feed variety, Scholar from Syngenta, makes the list with a yield to match the best current feed variety Shada at 108%.

These two yield slightly below the top malting variety but could find a market in livestock areas where straw, grain quality and disease resistance can be more important than simple yield.

But a new variety may struggle to break into established markets with Westminster (93%) popular in the West, and Waggon (100%) in the North.

The star of the oilseed rape world making the HGCA list was a top yielding hybrid with high quality food-grade oil which is set to attract a price premium.

The variety V316OL from Monsanto is 2% above the next variety on the HGCA East/West region list and is the first variety to be approved with both high yield and top-quality oil which is high in oleic and low in linolenic acid (Holl).

These Holl varieties currently attract a price premium of £25-35/t over conventional rapeseed, but are only grown on contract and no deals have yet been agreed for next autumn’s drillings.

Holl on the rise

David Leaper, seed technical manager at distributor Agrii, says the area of Holl rapeseed could increase to 15% of the 2015-drilled crop compared with 5% currently.

He says Holl varieties are good for growers in terms of premiums and good for crushers supplying more versatile oils to restaurant chains such as McDonald’s and KFC.

“For the grower, the variety has good yield, oil level and disease resistance and could take a significant part of the Holl area,” says Mr Leaper.

Eventually, Holl varieties could become the norm for growers as they outyield other varieties and offer price premiums because of their wider potential use, say experts.

Lee Bennett at Openfield says there is no reason farmers would not grow the variety because of the yield and premium, while it had good resistance scores of 6s for key diseases light leaf spot and phoma.

“It could give a significant contribution to the farmer’s bottom line,” he says.

The pick of North region list is hybrid variety Exentiel, again from Monsanto, which came top in NiabTag and Agrii trials in terms of gross output, according to Mr Leaper.

“We like the traits of this variety with good phoma and light leaf spot resistance, high oil content and good pod shatter resistance,” he says.

The variety yield 109% in the North region, and has a minimum 6 score for light leaf spot resistance for the region and an 8 score for phoma.

Mr Bennett sees the variety as a good prospect for Scotland, as it is early maturing and shorter strawed than fellow Monsanto variety Explicit, which also makes the North list.

The hybrid variety Harnas from Syngenta is just behind V316OL in terms of yield at 107% for the East/West region, but comes a clear top in the North region at 3% higher than the rest at 114%.

The variety has a good general profile but lowish oil content, while RAGT variety Arrazo yields 106% in the East/West list but has  lower oil than Harnas at 43.6%.

Other varieties recommended for the East/West region include Picto and Campus from KWS, along with Bayer’s second variety Fencer after last year’s success with Harper, and a clubroot resistant variety Mentor from Lembke.

The North list includes four from the East/West region –  V316OL, Harnas, Campus and Mentor plus three others Exentiel and Explicit from Monsanto and PT234 from DuPont Pioneer.