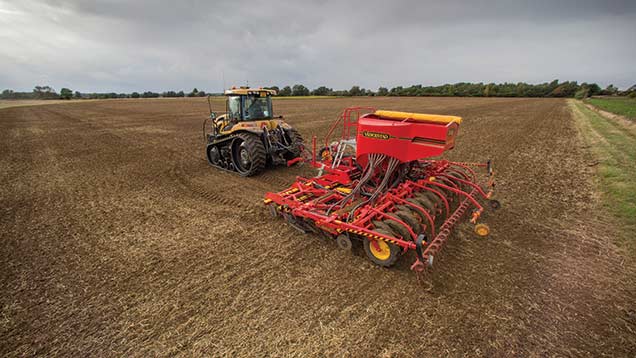 Pushing back drilling dates to hit unwieldy blackgrass with stale seed-beds can be a highly effective control method, although ensuring successful establishment of the next cereal crop is critical to reap the full benefits.

Soils will inevitably become cooler and wetter as winter draws in, so growers who find themselves drilling into mid-October will need to proceed with care and consideration to avoid a false start.

See also: How to create the perfect stale seed-bed

Increasing seed rates to offset any losses caused by delayed drilling is the single most important factor in successful establishment, according to Mr Martin.

“This is really important because you are naturally going to lose more of the crop through the heightened risk from pests,” he says.

He recommends upping rates from 300 seeds/sq m when drilling in mid-September to 450 seed/sq m in mid-October.

Selecting a variety that is more suited to going in the ground later will help too. “It needs to be a suitable variety with good vigour so that it will jump out of the ground.”

He suggests the winter wheat variety Leeds, a strong performer in the cold and wet conditions of 2012 with good resistance to fusarium and yellow rust.

He also names specialist variety Belepi as another choice, a spring wheat with a wide sowing window stretching from mid-October to April.

Mr Martin notes that if autumn conditions are stacked against drilling, growers should seriously consider a spring alternative.

“With the best will in the world, if it is too wet to drill you really need to go for spring cropping instead,” he says.

“When drilling late, growers need to do all they can to minimise compaction if soils are getting wetter. If you have very wet soils, we have seen this is absolutely crucial,” says Mr Slater.

Growers should consider machinery tyres and tyre pressures, and lose any extra weight on equipment. Tracks, large tyres and appropriate pressures can reduce the impact of machinery on soils.

“You need to be moving across the the top of the soil as gently as possible, otherwise you risk squashing the air pockets out of the ground and the soil could then slip into an anaerobic state which can kill the crop roots,” adds Mr Slater.

“A well consolidated seed-bed with the seed drilled to a 4cm depth is the optimum for cultural control to protect it from slugs,” explains Mr Martin.

He advocates taking a methodical approach when it eventually comes to drilling after a stale seed-bed.

“Make sure you get your rotation right by leaving the worst blackgrass field until last. It is a simple, common-sense thing that is often forgotten.”

Another tip is to ensure the seed-bed is not overworked, as this can lead to soil health issues later on.

“Less is sometimes more with cultivation and all you are after is good seed-to-soil contact,” he says.

Mr Slater strongly emphasises the need for a fresh source of water-soluble phosphate around the seed at drilling. “As soil gets colder, we need the roots to grow faster and phosphate will help the seed to establish well,” he says.

This will encourage root development, allowing the plant to access more nutrients, and will also help to bolster tolerance of harsh winters and both wet and dry springs and summers.

Growers need to apply phosphate just before or at the same time as drilling, but Mr Slater recognises this will be heavily dependent on conditions at the time.

He also recommends keeping a close eye on manganese, as a deficiency in this trace element can leave seedlings more vulnerable to frosts.

One advantage of later drilling is that residual pre-emergence herbicides tend to last longer and work many times better, thanks to lower soil temperatures.

“On the other hand, there is the risk that the pre-emergence can be a bit too hot on the crop and this is why it is so important to have at least 32mm of soil cover – you cannot afford to have shallow seed because you will get crop damage,” warns Mr Martin.

He adds that pre-emergence sprays should be based on pendimethalin and flufenacet actives.

Cover crops can be used to dry the soil out prior to cereal drilling while combating soil compaction.

Mr Martin acknowledges that cover cropping will need to have been planned for and drilled by early September.

“It ideally needs to be in the ground by the first week of September, but even if the cover crop goes in later, it can be a better option than having nothing there at all,” he says.

The cereal can then be drilled directly into the cover crop in November.