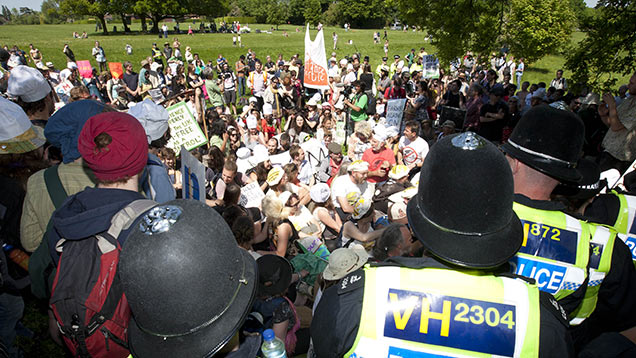 The results of the UK’s first open field trial of GM wheat were published this week.

Although the modified wheat failed to significantly repel aphids, lead author and crop scientist Dr Toby Bruce says he has not given up on the technology.

Here Dr Bruce answers nine questions on the trial’s background, funding and where next for the GM crop.

1. What was the aim of the GM wheat trial at Rothamsted?

The aim was to test the hypothesis that wheat, genetically modified to express an aphid alarm pheromone called (E)-β-farnesene, might repel aphids – a serious pest of arable crops in the UK – in the field.

If this worked, wheat might be able to “protect” itself and farmers might be able to reduce the use of insecticides, benefiting the environment, the farmer and making arable farming more sustainable.

See also: Blight and nematode-resistant GM potato in the pipeline

2. How did you make the GM plants?

We took small samples of wheat plants and physically inserted the genes into the cells.

The genes were coated on the surface of tiny particles of gold and shot into wheat cells using a device that is sometimes called a “gene gun”.

We then used the cells containing the new genes to make seedlings in the lab.

3. Where did the genes come from?

The genes we inserted into the wheat plants were produced by chemical synthesis and not taken from another plant or animal.

The gene that makes (E)-β-farnesene, encodes a protein that is similar to that found in peppermint but versions of this gene are also present in many other plants.

The other enzyme required – farnesyl pyrophosphate synthase – had similarity to that found in cows (Bos taurus) and was encoded by a synthetic and optimised gene sequence.

4. What were the results of the field experiment?

GM wheat plants were successfully modified to produce the aphid alarm pheromone in significant quantities without major unexpected changes seen in the appearance or performance of the new wheat plants, which looked and yielded as normal.

The GM wheat repelled aphids in the laboratory, but in the field trial there was no statistically significant difference observed between the GM wheat and the control wheat.

5. Has the trial been a failure?

It has certainly raised additional questions rather than provided simple answers.

The discrepancy between laboratory biology and the agronomy of the field is a frequent occurrence in plant science and so is not completely unexpected.

Conditions in the field are much more complicated and variable than in the laboratory.

We are considering future work to discover more about this.

Every experiment is designed to test a hypothesis.

In order to do a credible test that will give a reliable answer one needs to have controls and needs to test the experimental “subject” against the controls.

If the experiment is well designed, and all the controls are in place, then one can test a hypothesis.

This is normal scientific practice.

The experiment itself was successful, because it allowed us to test the hypothesis of whether the GM wheat could repel aphids in the field.

It provided a conclusive answer that the wheat did not repel aphids in the field, but that is not the same as a failed experiment or failed science.

6. The study showed aphids become less responsive to the chemical when exposed to it for some time. What does this mean?

Habituation to prolonged exposure would not occur due to it being released by a GM plant, but could eventually occur however the EBf was delivered.

The plants used in this study were producing the alarm signal constantly, and one improvement would be to change them to produce the chemical only when they are attacked, or only at the more vulnerable growth stages.

This more limited exposure would reduce the chance of the pests being constantly stimulated by and eventually ignoring the alarm signal.

7. How much money was spent on the project?

The project was funded entirely by the UK government through the Biotechnology and Biological Sciences Research Council (BBSRC) to an initial value of £1,176,000.

The research cost of the whole project was £732,000 and £444,000 was invested in fencing to use in this and future research trials.

The fencing protects the site from intruders and prevents wild animals from entering.

An additional £1,794,439 was funded by the BBSRC for security measures at Rothamsted to protect this and other research trials.

8. Why has it taken so long to publish the results?

We finished the fieldwork in December 2013, after which we had a large amount of experimental data to process and analyse.

We then wrote up the results in a draft manuscript, as agreed by all the co-authors, for peer review and publication.

This process commonly takes many months – that is the norm with scientific publications.

9. What will happen now?

There are some clear lines of potential future investigation.

We have learned that to repel aphids in the field, we may need to alter the timing of release of the alarm signal from the plant to mimic more closely the release by the aphid, which happens in short bursts in response to a threat.

This may require altering release rates of alarm pheromone from the plants, but also engineering the wheat plant to release the pheromone only when the aphid arrives.

Dr Tony Bruce, Rothamsted Research’s lead author for the GM wheat trial and crop scientist, can be contacted on Twitter at @Toby_Bruce.