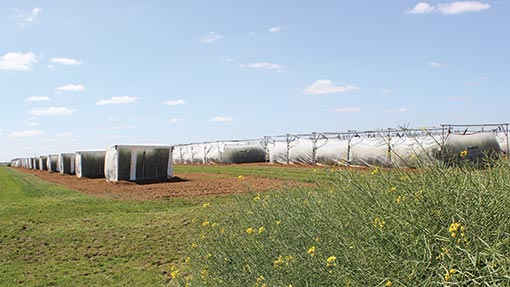 Hybrid varieties are key to France’s success with oilseed rape and this trend looks set to gather pace with over 1.5m ha planted this season and bumper yields expected.

This comes despite the ban of neonicotinoid seed treatment for the crop coming a year earlier for French growers compared with the rest of the European Union.

Part of the hybrid success story stems from a breeding station based in the bread basket of France, about 60 miles south of Paris, near the small town of Boissay.

This is the base for one of the leading oilseed rape breeders, Dekalb, who take up 50% of the oilseed rape seed market in France, which include its top three varieties – Exstorm, Expertise and Explicit.

The Monsanto-owned seed supplier is looking to breed varieties which perform well in tough conditions, and UK farmers have been growing varieties such as Excalibur and Excellium, which show good autumn establishment and phoma resistance.

Expower could be the next variety to take the UK by storm, according to breeder Laurent Verdier, who says the addition of low branching along with good autumn growth and resistance to phoma would make it useful for UK growers.

“Hybrids have double the branching potential over open pollinated varieties, which means you can sow at lower seed rates and they can still put up with a lot more and compensate much better,” he says.

Mr Verdier adds his focus is to produce reliable varieties which can be sown at lower seed rates and be profitable for growers using lower inputs.

Of the 1.5m ha of oilseed rape being grown in France, 80% is made up of hybrids, according to lead breeder at the station, Jean-Pierre Despeghel (pictured).

This season, French growers are hopeful of a bumper year following good autumn establishment and mild winter, with yields in an average year of about 3.5t/ha in the main growing areas of France. 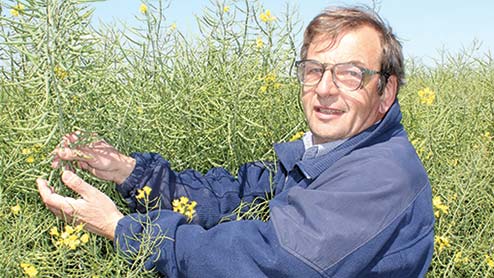 “It’s generally looking very good. I have never seen so many pods on plants so we should be looking for some above average yields,” Mr Despeghel adds.

The neonicotinoid seed treatment ban, which the French government implemented a year ahead of the rest of the EU, is a worry for French farmers and he believes growing hybrid varieties with good autumn establishment at a lower seed rate could be a way of limiting pest damage.

Hybrids can compensate better and cover all the ground with better branching, which could be also useful in the battle against insect pests as growers will now have to spray in the autumn to control pests rather than rely on seed treatments.

“The thing is, it is so hard to know when to spray, and we can be looking at having to do three or four applications and still not get the control we want,” he says.

There is also a push towards high oleic, low oleic (HOLL) varieties which give a much healthier oil with good stability at high temperatures for use in the food industry, according to Geoff Hall, Monsanto’s commercial lead for seed and traits in north-west Europe.

“There is a new market with the HOLL replacing sunflower oil and being used in places like McDonald’s,” he says.

With a price premiums for the crop and high yielding varieties, such as V315OL, now available he believes these will become much more common in the UK.

In Denmark, this year’s oilseed rape harvest is looking promising for many growers, according to Danish agronomist Henrik Madsen, who says hybrids now make up the majority of the crop and have been key in pushing forward yields.

“The average oilseed rape yield is around 3-4.5t/ha, but I imagine this year growers will be aiming towards the higher end of the scale,” he says.

“We normally sow from 5-25 August, but very rarely does anyone drill in September. This year the weather has been fairly kind and most crops established well and look very good now,” he adds.