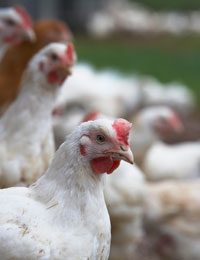 is launching its first free range chicken that has been reared using soya-free feed.

Concern is mounting that the widespread use of soya, a standard ingredient in chicken feed, could be contributing to the deforestation of the Amazon rainforest in Brazil.

Abel & Cole has teamed up with Devon chicken producer Peter Coleman, an expert in animal nutrition. He was inspired to create a soya free feed after visiting the Amazon.

Mr Coleman explained: “A chicken requires protein to build up its vital amino acids, the building blocks of life, particularly during its first three weeks. Protein in chicken feed comes mainly in the form of soya.”

Mr Coleman was contacted by one of Abel & Cole’s product hunters, Martin Humphreys who said: “We were researching the idea of offering our customers an ethical, but affordable option when it came to chicken, so were looking into the best possible free-range birds reared in Britain.”

The new feed uses British ingredients such as bean, peas, rape, sunflower and wheat. And Mr Coleman has now converted all of the chickens on his farm to the soya free feed.

“If you cannot afford to buy an organic chicken, we feel this is the absolute best alternative both from an ethical standpoint and as far as taste goes,” said Mr Humphreys.